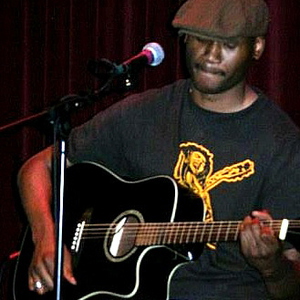 After a successful debut EP Soul Liberty-Demo Sessions in 2006 featuring the critically acclaimed single (Give my) soul liberty, the Nigeria born, Baltimore Maryland based artist has just released a much anticipated sophomore album this October 2008. Aptly titled Come on Home this new project encompasses his experiences touring around the country over the last two years since his debut recording. Already the new release is garnering media attention and climbing the New Music charts on CMJ member radio stations.

Ka-Chi's style on acoustic guitar complements his soulful sound as he delivers haunting tales of truth in an eclectic blend of pop-folk and reggae music"....Paul, November 2008

"Ka-Chi sounds like the voice of a one-man revolution that is willing and able to spark a change for good, whether it be socially or in your way of thinking. It is as smart as anything else undiscovered you will hear for some time...... His music reflects how real his ideals are, and how honest of a person he is.....Plain and simple, this is music that begs to be heard; so do it. ".... Brian Campbell, www.DCathome.com

"With just a guitar and his rich, soulful vocals, the Baltimore based and Nigerian born Ka-Chi has released a very impressive debut consisting of 5 tunes that often walk the line with a sound reminiscent of the acoustic sides of Bob Marley and Ben Harper (the last cut on the disc is a great cover of Marley's "Redemption Song"). With a delivery that's very confident and laid-back, Soul Liberty - demo sessions shows that he is just as impressive lyrically as he is musically with lyrics dealing with subjects like life, relationships and taking control of your destiny. With a demo this good I can't wait to hear what Ka-Chi has in store for us next.... " Geoff Melton, The Music Korner

"Ka-Chi's song "(Give my) Soul Liberty" entertains, soothes and inspires. He implores you to take control of your future and steer your destiny to the direction you want." ...www.naijajams.com

"(Give my) Soul Liberty is one of the best songs by an indie artist that I've heard in a really long time (and I hear a LOT of indie music)".....Roo radio - World Class Rock.

"An introduction to a new age troubadour. The theme of Ka-Chi's music is "Soul Liberty" (Seeking freedom, Pursuing happiness through love, Living in truth). A term he coined to define his experiences and the messages he has been called to share through song.