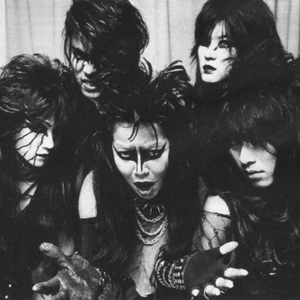 Jurassic Jade was one of the first bands in Japan to mix thrash with death metal. Their first full-length debut LP "Gore" was released '89 and reissued on CD in 1991 and 2009. Their second full-length studio album "Never Forget Those Days" (Japanese title: "Dareka ga Koroshita Hibi") was released in '91. In the mid-00's Jurassic Jade went from the Howling Bull label, where they released the two albums "Wonderful Monument" and "Left Eye" through, to Bang The Head records. In 2005, the band is celebrating their 20th anniversary by releasing a compilation CD/DVD set "Kuroi Kajitsu (The Early Years 1985-1988)". The band released two more EP's, named "Hemiplegia" (in 2006) and "Endoplasm" (in 2008). Drummer Haya is also a support-member for Chiba's thrash metal act Casbah. Ex-guitarist Kuro was in the early 90's a member of metal act ???????. Ex-bassist Mataro was also a member of occult speed/doom metal act Bellzlleb.