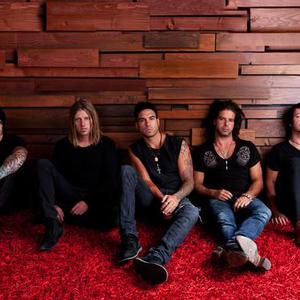 ?Juke Kartel is one of the best rock bands to come out in a long time. They definitely are on their way to being a commercial arena rock band, with a ?90s, grunge-like quality that gives them an edge.? ~ Producer Rick Parashar (Pearl Jam, Alice in Chains, Nickelback) Honed amidst the underground club scene of Melbourne, Juke Kartel has arrived on U.S. soil ready to rock. In little more than four years, the five-member band has gone from local larrikins to fast-rising stars ? opening for Nickelback and sharing the stage with Slash, Ozzy Osbourne, Fergie and Ronnie Wood.

definitely are on their way to being a commercial arena rock band, with a ?90s,
grunge-like quality that gives them an edge.?

Honed amidst the underground club scene of Melbourne, Juke Kartel has arrived on U.S. soil ready to rock. In little more than four years, the five-member band has gone from local larrikins to fast-rising stars ? opening for Nickelback and sharing the stage with Slash, Ozzy Osbourne, Fergie and Ronnie Wood. This summer they open the Australian leg of Slash's world tour and, later this fall, will introduce their own brand of hard-driving rock to stages across America.

Levolution (Carved Records) represents Juke Kartel's debut album in the U.S., to be released on September 28, prefaced by its first U.S. single, ?If Only.? Produced by Brian Virtue (Jane's Addiction, Velvet Revolver, 30 Seconds to Mars, Chevelle) and Rick Parashar (Pearl Jam, Alice in Chains, 3 Doors Down, Nickelback), the album features a half-dozen freshly penned tracks and six from the band's 2009 Australian CD, Nowhere Left to Hide, remixed by Dan Korneff (My Chemical Romance, Cavo). With its overarching theme of personal growth and ?the journey we're all on,? says vocalist/lyricist Toby Rand, Levolution finds musical parity in its strong hooks, multi-textured instrumentals and passionate vocals.

The album opens with the new track ?Anybody Out There,? which serves as a call for common humanity as much as a barometer of the band's impending reception outside its native shores. ?My Baby,? a cautionary tale of a rock relationship punctuated by staccato verse, is followed by the equally forceful ?Bullet Wearing Trademark Clothes,? Rand's vocals soaring to warn that, no matter what disguise they wear, a woman can easily shoot down a man's ego. ?If Only,? its acoustic intro sliding into a mid-tempo rocker, shares a carpe diem philosophy with ?The Sign,? a guitar-fueled journey toward self-awareness and empowerment.

Turning darker with such psychological rockers as ?Save Me? and ?Road of Glass,? whilst showcasing the guitar powerhouse and syncopated beats of Juke Kartel, the album explores the consequences of mind games and car crashes. The acoustic brilliance of ?Soulshaper? offers gentle guitar interplay, and showcases the bands true acoustic talent, before the anthemic ?December? segues into a full-throated warning of the perils of excess in ?Throw It Away.? The album's thematic arc comes full-circle in ?On Fire,? with its plea for focused passion, and the newly written ?Find Out,? a musically layered journey that concludes Levolution with true rock'n'roll grit and lingering hope for optimism.

Juke Kartel made its Australian breakthrough with the 2009 debut album, Nowhere Left To Hide, recorded at Seattle's London Bridge Studios. The CD, which kicked off the band's relationship with legendary producer Rick Parashar, yielded three radio singles ? ?Save Me,? ?December? and ?If Only? ? and generated critical kudos. Rock website TuneLab Music implored listeners to ?Feast your ears on Nowhere Left to Hide and enjoy the slab of rock ?n roll conviction Juke Kartel dishes out.?

That conviction derives, in part, from a long brotherhood. As young teenagers in Melbourne, vocalist Toby Rand, guitarists Todd Burman and Dale Winters, and bassist Tommy Kende paid their dues playing clubs and pubs for nearly seven years, recently importing South African-born drummer Jason Pinfold into the band. After growing a loyal fan base in its hometown, Juke Kartel stepped up in April 2006 when Nickelback asked the lads to open two stadium gigs in Melbourne, followed by an arena tour of North America, a backup spot on the Seether tour and, finally, the band's own ascension as headliners Down Under.

Verifying their grassroots appeal as the first unsigned artist to perform at the Australian MTV Video Awards (with an energetic rendition of ?Throw it Away?), Juke Kartel would go on to earn such accolades as a 2009 Australian People's Choice Award and Best Unsigned Artist at the 2009 Music Oz Awards. In Summer 2006, vocalist Toby Rand also gave worldwide audiences a taste of his vocal power and charisma as a top contender on the CBS reality show ?Rock Star: Supernova,? with Juke Kartel going on to join the Supernova tour in 2007, performing alongside M?tley Cr?e drummer Tommy Lee and former Jane's Addiction guitarist Dave Navarro.

With a solid rock foundation, Juke Kartel's evolving musical style is informed by the diverse influences of its members. A recurring blues aspect, for example, may be heard in Toby Rand's melodies as well as the complex guitar work of Dale Winters, who grew up listening to B.B. King and Robert Johnson. Their stage presence, rife with cheeky banter and a mischievous streak that can be attributed to their Aussie heritage, is bolstered by mutual admiration and respect, having worked together for the better part of a decade. ?We're more than just band mates. We're a family that chose each other,? explains Rand, who says that, musically and personally, Juke Kartel has never been tighter as a unit. ?We've all gone through our individual challenges, and now is the perfect time for all this to be happening.?

For more information, please visit the band on its website (www.jukekartel.com), on Facebook (www.facebook.com/jukekartel) or MySpace (www.myspace.com/jukekartel).