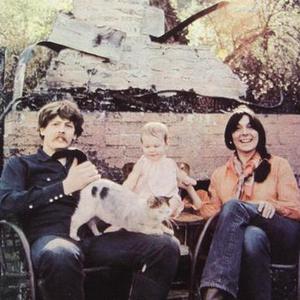 Judy Henske and Jerry Yester met while both were working in the West Coast folk scene in the early 1960s, Henske as an uncategorizable solo singer recording folk, blues, jazz and comedy, and Yester as a member of the Modern Folk Quartet. They married in 1963. A few years later, Henske's career was faltering as a result of ill-advised forays into the cabaret market, while Yester had produced albums by Tim Buckley and The Association, and had also replaced Zal Yanovsky in The Lovin' Spoonful.

The pair, with their new-born daughter, moved to Los Angeles in 1968. Henske shared a manager, Herb Cohen, with Frank Zappa, and it was Zappa who suggested to her that she should put to music some of the verse she was writing. Yester, at this point, was working with Yanovsky on the latter's first solo album, and experimenting wildly with new electronic and other sound effects. The trio combined to put together Farewell Aldebaran, drawing on a varied selection of their musician friends, and it was issued on Zappa and Cohen's new Straight label.

The album contains a wild mixture of late 1960s styles, as though recorded by ten different bands, but all featuring Henske's almost gothic lyrics and remarkable vocal range. The opener, "Snowblind", is a Janis Joplin style belter which was issued as a single, but is immediately followed by "Horses on a Stick", almost a parody of "sunshine pop". Next is the quasi-classical "Lullaby", and then a melodramatic hymn with strong anti-clerical lyrics, "St. Nicholas Hall". From here, the album picks up even higher in quality. "Three Ravens" is a sublime slice of baroque pop; "Raider" has been described as an acid sea shanty; "Rapture" is a folk-rock waltz; and the upbeat "Charity" is possibly the best track of all. Finally, the title track is the most overtly psychedelic track on the album, featuring electronically treated vocals and Bernie Krause's Moog synthesizer.

Although the album got some good reviews, it failed to sell, purchasers possibly driven away by its sheer eclecticism. Henske and Yester went on to form a more conventional band, Rosebud, before they went their separate ways at the start of the 1970s.