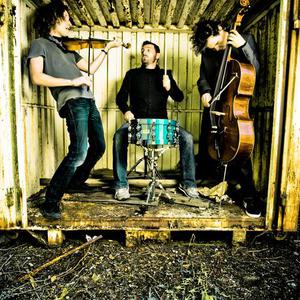 There are at least two artists called Judgement Day: 1. Judgement Day is a string-metal band consisting of: Anton Patzner: Violin Jon Bush: Drums Lewis Patzner: Cello 2. Judgement Day was formed in 1988 by Theo van Eekelen and Jeroen Dammers. Freek Kamphorst and Maarten Vlot completed the band. Influenced by extreme music they started to write their own songs and played a few successful gigs in Holland. In July 1990, they decided to record their first demo called "HYPOCRITICAL".

2. Judgement Day was formed in 1988 by Theo van Eekelen and Jeroen Dammers. Freek Kamphorst and Maarten Vlot completed the band. Influenced by extreme music they started to write their own songs and played a few successful gigs in Holland. In July 1990, they decided to record their first demo called "HYPOCRITICAL".

Soon after recording this demo Wim van Burken joined the band to become their second guitar-player. In June 1991, they recorded their second demo called "CORPSEFLAKES".

With this demo they got very good reviews in different magazines all over the world. Only the expected deal stayed away. This second JUDGEMENT DAY demo has been sold out, about 800 copies all over the world. A few months after the recording of this demo, Maarten and Freek decided to leave the band to concentrate themselves on, in their eyes, more important things. A new bass-player was found soon in the person of Bas van den Boogaard. It was very hard to find a really good drummer. After trying out a lot of them, they asked Freek back to do gigs abroad which happened in July 1993. JUDGEMENT DAY played the Czech Republic. They performed at the famous "ROCK-SOCK" festival in front of 15.000 people. At that time the band also played in Slovakia with bands like KRABATHOR, DEHYDRATED, RISING NATION and DARKSIDE.

In August 1993 they finally found a really good drummer by the name of Nolo. At last, with a solid lineup they started to write new material for the next release. The new brutal stuff was tested on the audience when JUDGEMENT DAY was in the Czech Rep again .The band did some amazing gigs in front of an insane crowd in major towns like Prerov and Pilsen. Back in Holland the band did some gigs with bands like BLOOD and SINISTER.

In July 1994 , the time was right to record their third demo, 24 tracks, at the famous HARROW studios.

This demo is called "PATHOLOGY OF CROWDING". It contains of four songs of death fuckin metal and a cover of SLAUGHTER, "F.O.D" .This demo got very good reviews in different (underground)zines.In August 1994, JUDGEMENT DAY went to the Czech rep. to do some more gigs . One of these gigs was with PUNGENT STENCH in front of 700 people.

Finally, in December 1994 JUDGEMENT DAY signed a deal with Effigy records from Norway. The band signed for a split CD and a full-length CD. The split CD "EFFIGY OF THE POSSESSED" was released in October 1995. Other bands on this one are EVISCERATION (Hol)(RIP) and ESMEGOR (ITA).

In October 1995, JUDGEMENT DAY went to the Sandwijk studios to record their debut CD named "CIRCUMCISION OF THE MARTYR" . The CD contains seven aggressive and brutal compositions in the pure JUDGEMENT DAY way, recorded on 24 tracks and a total playing-time of 45 minutes. Besides the grunting vocals from Jeroen, they had Simone in the band as a second vocalist. She had an amazing brutal voice on which many death metal singers could be jealous. But she couldn't manage to do it right on stage and she left after the tour in the Czech Rep. The next Czechian tour was in November 1995. Together with KRABATHOR the band did the " MARTYRIAN LIES TOUR". JUDGEMENTDAY did ten gigs in big towns like: Prague, Ostrava, Brno and Pilsen.This was a very successful tour, every gig over 250 people.

The years 1996 and 1997 were very difficult for the band. Big problems started with Effigy rec. After some conversations, we had enough of this label and decided to quit doing business with them. JUDGEMENT DAY did some local gigs in 1996 and a little tour in Germany together with SINISTER. After those gigs the band returned home and started to write new material. Suddenly, Jeroen and Nolo decided to leave the band due to a lack of interest.

A temporary new drummer was found in CENTURIAN drummer Wim van de Valk . He offered to help the band out. After a few rehearsals, which went very well, JOHAN WESDIJK, also vocalist in PLEURISY came along and he fitted in. With the new lineup JUDGEMENT DAY did some shows in Germany with KRISIUN and PURGATORY and also a gig on the "NUCLEAR STORM" festival in the Czech rep. In 1997 JUDGEMENT DAY recorded 3 songs for a 7" (produced by Vincent Dijkers) which should be released through Moonlight rec. from Germany. But on hazy reasons Moonlight rec. disappeared and a lot of bands including. JUDGEMENT DAY were ripped off . For the rest in 1997, JUDGEMENT DAY played with bands like BENEDICTION and KRABATHOR. And Theo joined a newly formed band, named: HOUWITSER. This band started by an idea of Aad (SINISTER / THANATOS) and guitarist Michel (ex-SINISTER).

In August 1998, a new drummer was found , ex-PASSION drummer Paul Beltman is sitting behind the drumkit right now ! Johan left the band, his other and main-band PLEURISY took all of his time, and the same for Bas in 1999. His other band and school took all of his time, so he decided to leave too!

Theo switched from guitar to bass and joined the Ancient Ones THANATOS in 1999. After testing a few musicians, JUDGEMENT DAY found a new guitarist in October '99, namely Ferry Klingenberg. After a few rehearsals we decided to record a few songs for promotional purposes. At that time,we didn't have a vocalist , so Paul started to write the lyrics, and decided to do the vocals for the recording by himself. In January 2000 we entered Paul's studio and during the recording sessions we found a very suitable vocalist, namely Olivier van der Kruijf. At last, with a solid lineup, JUDGEMENT DAY was able to do gigs again.

In 2000 JUDGEMENT DAY also recorded a promo, entitled "Gothcrusher", that same year the 7" "To Conjure Conjoint Confusion" was finally released. JUDGEMENT DAY founder Theo decided, he didn?t have enough time to play in two bands, so he left the band. The new bass-player is Willem Hofs (ex-Dimensional Psychosis). In November 2002 they released their self-financed mini-cd "March Of The Apocalypse".

Since the completion of the current line-up (2000), JUDGEMENT DAY has done gigs with Obscenity, The Haunted, Centurian, Inhume, Mangled and Orphanage, in the Netherlands and in Germany. In August 2003 they started the recording of their 2nd full-length, "40 Minutes To Impact". The recordingsessions were finished in November and they sent some promo's to recordcompanies. New Aeon Media showed interest and they signed JUDGEMENT DAY. On April 2004 the CD has been released.

17 Mar 2005 Judgement Day broke up.
Apparently, they had failed their judgement.