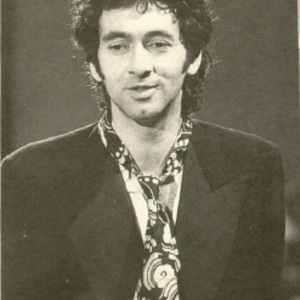 Jona Lewie (born John Lewis, 14 March 1947, Southampton, England) is an English singer, songwriter and multi-instrumentalist. Jona Lewie joined his first group, The Johnston City Jazz Band, while still at school in 1963, and by 1968 had become a blues & boogie singer and piano player. After being a member of the amateur group Dramatis Personae while still at school, Jona started in the music business as a session pianist, before joining the cult pub rock band, Brett Marvin & The Thunderbolts, in the late 1960s.

After being a member of the amateur group Dramatis Personae while still at school, Jona started in the music business as a session pianist, before joining the cult pub rock band, Brett Marvin & The Thunderbolts, in the late 1960s. The group was a popular live act for several years, but their only mainstream hit single was "Seaside Shuffle" in 1972, released under the one-off nom de disque Terry Dactyl & The Dinosaurs. Borrowing heavily from Mungo Jerry's 1970 chart-topper "In The Summertime," "Seaside Shuffle" was an unashamedly commercial disc quite at odds with the Thunderbolts' usual style, but reached number 2 in the UK Singles Chart.

However, Lewie looked likely to remain a one-hit wonder until he was signed up by Stiff Records in 1977. Following appearances on the Stiff package tours, he finally scored a solo hit in 1980 with the humorous synthpop number, "You'll Always Find Me In The Kitchen At Parties,"which made the British Top 20. Although his next single "Big Shot - Momentarily" failed to make any impact, by the end of the year he was back in the charts with what became his biggest (and, to date, last) UK hit, "Stop The Cavalry." He was, however, to reach No. 2 on the Australian charts in 1981 with "Louise (We Get It Right)"

Although now one of Britain's (and, incidentally, Germany's) most familiar Christmas singles, "Stop The Cavalry" was not originally intended as a Christmas song ? it was released in late November after the record company spotted the line referring to the festival: "I wish I was at home, for Christmas," Not only this, but the specific style of the brass instruments and bells in the chorus are very noticeable as a christmas style theme.

Lewie has since been able to live comfortably on the continuing proceeds which Christmas airplay of "Stop The Cavalry" has annually brought him, as well as the proceeds from some wise property investments.

The tune and style of "Stop The Cavalry" was later parodied for a series of catchy and humorous TV adverts for John Smith's beer.

In December 2005, Jona was recruited by Channel 4 to record a new Christmas record with other old stars who had Christmas hits, on Bring Back The Christmas Number One.

The Best Of Jona Lewie