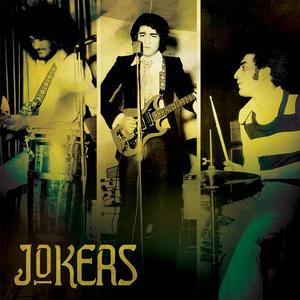 Hailing from Tehran, Iran, the JOKERS were arguably Iran's heaviest underground rock group during the early 70's. Having visited the UK for a short period, Vaheed, the lead singer and guitarist of JOKERS returned to Iran with new ideas and influences. After hearing groups like MC 5 & Cream, the JOKERS decided to pursue this type of sound, and subsequently recorded a heavy psychedelic blues album in a garage circa 1972 using nothing more then a reel to reel and two microphones.

Filled with heavy fuzz, loud wah guitars and screaming vocals, the album sounds unlike any rock artifact unearthed from Iran so far. Sadly no record label would release their album, so they continued to perform at local venues, and even managed to get a performance at the German Embassy before disbanding. Here for the first time ever is a limited edition pressing taken directly from the reels they recorded in 1972. Fully licensed, this is a one time pressing only. The 1000 copy CD comes in paste-on mini-LP jackets with inner sleeves to mimic their LP counterpart.