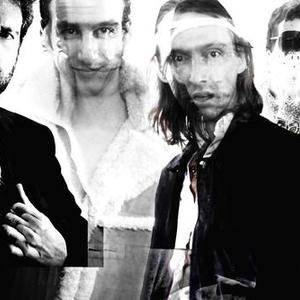 The brothers Thompson (from here on out: Chad & Keith) came up with the concept for Johnny Headband in the cold-water flat they shared right after being freshly spat out of college. The idea was sparked from a spirited ?what do we do now?!? conversation. Chad had an interest in recording & visual arts, Keith was into film & video, and both deeply loved tearing off their shirts while playing tennis-racket guitar in front of their hallway mirror. The duo began to transform their living space into a makeshift performance venue that included both musical & visual elements.

Neighbors complained, fines were paid, they moved on.

Zoom to now. The boys left their flat (and their shirts) behind and continued to build off of the A/V alchemy that was initially conjured there. Taking their home-show on the road things got much louder, sets & visuals more grandiose, and rather swiftly they became known for performances that fingered the fine line betwixt enthusiasm and absolute ecstasy.

Phase 3 EP, Johnny Headband's latest self-release, captures their experimental electronic world through fuzzy analog harmonics and dizzying dynamics. Self described as ?Class A Discrete? and caught up in a digital-whirlwind-media-overload, they want you to remember four things: 1.) breathe in. 2.) breathe out. 3.) breathe in. 4.) breathe out.