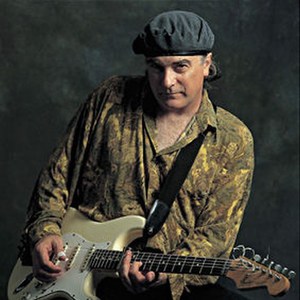 Many artists have their specialties some cut great records but need support to realize their studio sounds in a live setting while others are born performers who never quite translate to records as well as they do live. Rarely do you find an artist who excels at both.John Campbelljohn does.In each of his many forms.In his solo, acoustic blues performances he makes the most of the song.Campbelljohn soulfully commands the stage with rich vocals,while his powerfully prolific technique on guitar or trusty dobro lap steel further embellishes each composition.

His power trio ups the ante with an electric sound that can pummel an audience into submission or captivate them with the subtleties of ace musicians driven solely by the love of their craft.A tight rhythm section fronted by Campbelljohns distinctive prowess on slide guitar quickly demonstrates that, although Johns a Cape Bretoner, hes been cut from a plaid of a very different color. Power blues that touch on rock, reggae and roots with a few overtones of pure country these are John Campbelljohns stock and trade. Hes also added the wondrous sounds of the pedal steel to his live band shows to haunting effect. The overall quality of the musicianship, the energy of his delivery and the guaranteed good times that spring from the bands performances are proof of the pudding.Acoustically, John combines the influences of such diverse players as Fred McDowell, Ry Cooder and John Hammond while his electric shows earmark everyone from Sonny Landreth to Johnny Winter, Clapton to Duane Allman. A simple listen to any of his six CD releases tell the tale that John Campbelljohn solo or otherwise is a born performer and a credit to his accomplishments: Blues Artist of the Year, Guitarist of the Year, Slide Guitarist of the Year.His is a sophisticated, well-informed and progressive definition of the blues and his distinctive edge has been applauded from Sydney to Stuttgart.Treat yourself to something truly fan-friendly and fun a compliment to any fine establishment hoping to make a serious claim on grown-up entertainment with a no-nonsense master of many genres.
As many a mainlander will tell you, if you want to make a success of yourself, you have to do it away. Unless, of course, you're a Caper and your heart and soul are inextricably tied to the land for reasons that no outlander could ever comprehend. Despite the fact that Cape Breton is a hotbed of traditional Celtic music with its high energy fiddle-playing and step-dancing, John Campbelljohn focused his energies in other directions. Learning his first guitar chords at age 14 from his steel-working Dad, Chas, it was hearing the first strains of Duane Allman's ?Statesboro Blues? at a high school dance that set him on a course from which there was no return. Learning slide guitar became Campbelljohn's sole obsession. Step dancing could wait.

He, in truth, had been spoken to by the blues and he responded in kind, injecting his music with the same sense of frenetic energy, raw emotionalism and pile-driving rhythms that fire the regions rich legacy of Celtic fare. Musically, Campbelljohn covers a lot of ground ? his is an eclectic grasp of the blues grounded in the subtleties of Fred McDowell, Son House and Earl Hooker, yet channeled through a stylistic bisque that name-checks the mastery of Sonny Landreth, Duane Allman and Johnny Winter. Depending on the muse, he can veer off into territory that embraces reggae, roots-rock and (with the help of his pedal steel) pure country. Yet the core of his sound is a sophisticated, well-informed and progressive definition of the blues. He may follow a slightly different path than that taken by his tartan-clad brethren but the ?guts? inherent in the Cape Breton sound remain true-to-form and Campbelljohn's unique calling card no matter where his travels take him. The distinctiveness of his sound has been applauded and appreciated from Sydney to Stuttgart. In fact, his reputation abroad has blossomed into a German label contract on the Taxim label.

John released his debut in '93 and, as his originality begged immediate attention, with accolades pouring in across the next six releases: Blues Artist of the Year, Guitarist of the Year, Slide Guitarist of the Year. Regular nominations and a mantle-full of awards ? as well as constant recognition and critical praise for both his recordings and his live performances ? keep him in the limelight and feed his soul but, in true Maritime tradition, he prefers to further refine his craft in a self-driven quest for perfectionism that comes with the territory. Not content to be revered for the originality of his songwriting, his celebrated slide skills, his cut-to-measure vocals and his fan-friendly stage prowess, Campbelljohn can now add pedal steel guitar to his already sizable arsenal. At the same time, he is amping up his home recording capabilities to lay down his more adventurous ideas at his convenience as well as offer help to up-and-coming talent in search of hands-on direction.

John Campbelljohn is an exceptional blues musician with great instincts, tastefully concise solos and a no-nonsense approach to giving his fans the good times they not only deserve ? but have come to expect. John Campbelljohn is one nose-to-the-grindstone artist who is rarely satisfied with doing his absolute best and it is this very drive and ambition which keeps him in the foreground.

And ? thankfully ? there's still no sign of his step-dancing.
Source:Eric Thom/Blues Revue

The Land Of The Livin' CD2

The Land Of The Livin' CD1

Weight Of The World

The World Is Crazy: Live In Germany

Under The Blue Cover