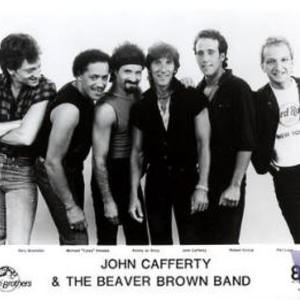 Best known for the music behind the 80s Rock n Roll fable "Eddie and the Cruisers" and the sequal years later, John Cafferty and the Beaver Brown Band were often stereotyped as the music of the film. John was a house painter by day, and played with his band at night, just trying to get something happening. The Rhode Island band struck oil when Scotti Brothers/CBS signed them to do a soundtrack for a movie they were still working on. The movie was a blockbuster, and the album went multi-platinum with 2 singles screaming up the charts.

On the Dark Side & Tender Years were both huge in airplay and some even say the band is what made the movie such a hit. Sax player Michael Antunes was actually in the movie as Cruiser's sax-man Wendell Newton.

After seeing the success, Scotti Bros signed the band to the label and had a couple hits of their own. The band released hits like Tough All Over, C.I.T.Y. and Small Town Girls. They also recorded two songs for the Rocky IV soundtrack, Voices of America's Sons and Hearts On Fire.

In 1989, six years after the first movie, Eddie and the Cruisers 2... Eddie Lives was released, but the soundtrack didn't follow the success of the first one.

Eddie And The Cruisers II

Eddie And The Cruisers