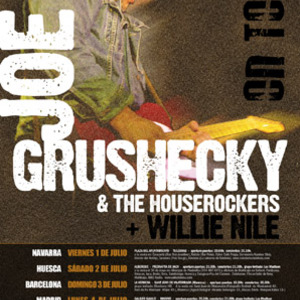 In 1976, Joe Grushecky, a high school special education teacher, started the Brick Alley Band. Grushecky's new band was a typical bar band. They signed to Cleveland International Records in 1977, who rechristened them the Iron City Houserockers. The band's first album was Love's So Tough, released in 1979, and was a fair success. Their next album, Have a Good Time but Get out Alive! (released in 1980), was a bigger success.

Two more albums followed, Blood on the Bricks in 1981 and Cracking Under Pressure (1983 as The Houserockers). By 1984, the band wasn't selling many records anymore and they were dropped by MCA Records. They broke up shortly thereafter.

After the breakup of the Iron City Houserockers, Grushecky returned home to Pittsburgh where he retook his teaching job (which he stll holds). He also began to sharpen his songwriting. He released a single entitled "Good Bye Steeltown". Finally, in 1989, he fully re-emerged with his new act, Joe Grushecky and The Houserockers.

Grushecky's first new album since the Iron City Houserockers days was Rock & Real, released in 1989. It would be followed by seven more albums, the most recent being 2009's East Carson Street. Additionally, he released two solo albums, Fingerprints (2002) and A Good Life (2006).

End Of The Century

Swimming With The Sharks