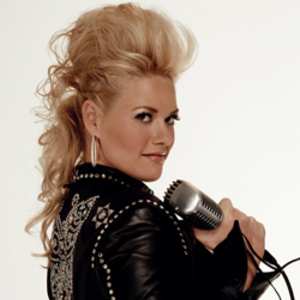 A sultry slide guitar, the lonely moan of a blues harp, the righteous thump of a fatback bass and the sticky soulful rhythm of a Beale Street backbeat ? within the first few bars of the first song on High Maintenance, her stunning debut release, Joanna Cotten lays it all out like a slow ride down through the delta. Then she starts to sing, and all heaven breaks loose. She calls her music "Funkabilly," and the appellation fits just right...

She calls her music "Funkabilly," and the appellation fits just right, serving as both the title of her album's leadoff track and as a dead-on description of Cotten's undeniable artistry ? a heart-stopping mix of God-given talent, flawless technique, and deep-down southern soul that adds up to the most potent, pure-country voice to come out of Nashville in a long, long time. By the time the song fades to a raucous, gospel-drenched finale it's crystal clear ? this girl was born to sing.

"I have to sing for people, that's just the way it is," Cotten says, setting her long blond hair in motion with a shake of her head. "It's like a beast inside of me that has to come out, and it's been that way since I was a baby girl."

Born in Memphis and raised in the "one-Burger-King town" of Forrest City, Arkansas, Cotten was pulling on her mother's skirt as a 4-year-old, saying, "Mama, when I grow up, I'm gonna be a country singer." Driven to distraction by her daughter's persistence, Cotten's mom finally relented.

"She said 'If you're serious, I want to do this right,'" the singer recalls. "She took me to this lady named Gloria Borell 15 miles away in Wynne, Arkansas, and she started teaching me breathing techniques, art songs and hymns."

Those initial voice lessons set the vocally gifted Cotten off on a lifelong journey that would take her from local talent shows to the Memphis' Grand Youth Opry and Rhodes College to Nashville's nightclubs, all the way to New York City ? where she attended the prestigious Juilliard School ? and then all the way back again.

Even early on, Cotten's was a double life. She'd be rigorously sharpening her classical skills on Tuesdays, but come Saturday night, she, her mom and her Motown-loving grandmother would head to the Arkansas Jamboree in Marianna where the youngster would hop on stage in cowboy hat and boots to belt out barn-burning versions of her favorites, from artists like Loretta Lynn, Jerry Lee Lewis, Lacy J. Dalton and Connie Smith.

"I remember one time when Gloria was trying to teach me what I was singing about in one of the hymns," Cotten says. "She said, 'Now, Jesus came down from heaven,' and I quickly responded, 'Yeah, but the devil went down to Georgia!'"

She was seven years old when her mother took her to Nashville for the first time.

"We went to Fan Fair, and it was like I had died and gone to heaven," Cotton laughs. "I was such a fan, I chased Lee Greenwood's bus. It was awesome."

The trips to Music City became more and more frequent, and even then, the singer was not afraid to turn on the attitude and make herself known. She was soon a pint-sized, onstage regular at upscale local showcases like the Stockyard.

Closer to home, Cotten became a member of a group called the Memphis Grand Youth Opry, performing every week on Beale Street and soaking up the incredible variety of music that seemed to be coming out of every doorway. Driving back and forth, it was country music all the way.

"I grew up on country radio, but at that point in time it was Lee Greenwood, and T. Graham Brown and horns," she says. "There really were no boundaries."

By the time she was in high school, music had become the driving force in Cotten's life, and she graduated a year early to accept a scholarship at Juilliard.

"When I got my offer for a scholarship, it was like 'I'm not gonna live my life saying I could have gone to Juilliard,'" she says. "'I'm gonna go up there and see what it's all about.'"

Even for a girl who was comfortable singing in Nashville and studied at Memphis' Rhodes College, New York City was a whole other ball of wax.

"There are so many stories about me going to New York, because I was such a country girl," Cotten laughs. "But I went up there when the whole 'Boot Scoot Boogie' thing was happening, so it was cool to be country."

It may have been cool to be country, but singing country in the conservatory just wasn't kosher. Cotten knew she was headed directly for a career in classical music, but her heart kept telling her where she needed to be and the kind of music she needed to make.

"I needed to make a decision about what I wanted to do with the rest of my life," she says. "I just called mom and said, 'I'm coming home.' But going home to me was never Forrest City, Arkansas."

"Burnt out" on singing, Cotten headed to Nashville and took a job as a legal secretary, avoiding music all together until a friend, aware of her incredible vocal gift, coaxed her onto the stage of Jack's Guitar Bar, a now legendary local dive that served as an early creative stomping ground for artists from Cotten to Keith Urban to Gretchen Wilson.

"I always used to close my shows with an aria, a cappela," she says. "So I sang this aria and Jack just freaked. He comes up to me and says, 'What's your favorite aria?' and I said ''Caro Nome' by Joan Sutherland, and he said, 'It's on the jukebox.' He had that song on his jukebox! From that point on Jack bent over backwards to help me."

Cotten began singing regularly at Jack's, building a large and loyal following. When Jack's closed up shop, she moved to another local club, 3rd and Lindsley, and things continued to build. It was at the latter venue that producer and future Warner Bros. CCO Paul Worley [Dixie Chicks, Martina McBride] caught her act and vowed to work with her in the future. Signing with EMI Music Publishing, Cotten was introduced to EMI's Bruce Burch, who helped the singer develop her writing chops.

"I started writing and that's when everything started falling into place for me," Cotten says.

The songs Cotten was writing reflected every aspect of her journey and showcased the incredible range and depth of her singing voice ? an instrument that glides naturally and effortlessly from a molasses-sweet moan to a skillet-greasy growl to a full-throated wail.

As her debut vividly demonstrates, Cotten has grown into a singer who comes with, and who is inseparable from, her own compelling story.

"I've got a gift that the world can't change or take away," she sings on the album's debut single, "The Prize," as a thumping beat and a slamming banjo drive the point all the way home. And every Cotten-penned song on High Maintenance completes another chapter of her unique musical journey, from the funky romantic frustration of "Hard to Want" to the introspective and inspiring balladry of "Keep My Faith," all the way to "Humble Town," a song that beautifully encapsulates the struggles of Cotten and countless creative souls along Nashville's Music Row. Two uncut gems from the Dennis Linde catalog, including the hilariously evangelistic Elvis tribute, "Miracle In Lee County," pay tribute to the late songwriter and round out this one-of-a-kind country collection.
It's been a long and winding path to her debut, and Cotten has grown with every turn in the road. These days, with High Maintenance ready for release, Cotten is chomping at the bit to introduce country fans to her own, patented brand of "Funkabilly."

"I can't wait," she enthuses. "Get ready to sink your feet down in the Delta mud!"