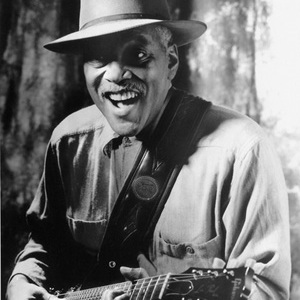 Singer, guitarist, and songwriter, Jimmy Burns is a contemporary bluesman who combines his Delta roots with R&B and soul to come up with a sound uniquely his own. Burns is a charismatic performer with an expressive, soulful, voice and a melodic guitar style to match. With a keen sense of his musical heritage Burns has created an upbeat style that has won critical acclaim both at home and abroad. Born near Dublin, Mississippi in 1943, Burns was fascinated by music early on. He loved the sounds coming out of the church, and the blues he heard on the streets.

With a keen sense of his musical heritage Burns has created an upbeat style that has won critical acclaim both at home and abroad. Born near Dublin, Mississippi in 1943, Burns was fascinated by music early on. He loved the sounds coming out of the church, and the blues he heard on the streets. Burns' sang in church and taught himself how to play guitar while he was still in the Delta. One of his particular favorites was Lightnin' Hopkins, His oldest brother, renowned Detroit bluesman Eddie Burns, is also a guitarist who played with John Lee Hooker for a number of years before striking out on his own.

Burns was 12 when his family moved to Chicago. Within a year he was singing with a gospel group called the Gay Lites. Secular music also beckoned. Living on the Near North Side, he was caught up in the music of The Impressions and Major Lance who would rehearse in a park near his home. In 1959, at the age of 16 he joined The Medallionaires, an established vocal group, and did some recording. Burns was also part of the folk scene in the early 60s. He sang and played guitar at The Fickle Pickle, (booked at that time by Mike Bloomfield), the Gate of Horn, and coffeehouses around town.

As R&B turned to soul in the 60s Burns cut a few soul singles for the USA, Minit, Tip Top and Erica labels. One of his Erica singles, I Really Love You, is a collector's item in Great Britain. Burns traveled throughout the Midwest, with a band called the Fantastic Epics. They appeared at the Arie Crown Theatre in Chicago on a bill with Jeff Beck and the Yardbirds. He formed his own band in the late 60s called Jimmy Burns and the Gas Company. The reality of raising a family however, cut short Burns' full-time musical career. Throughout the 70s and 80s he stayed close to home, continuing to play clubs and concert venues around town.
With the blues never far from his soul, Burns returned to playing full-time in the mid-nineties. He started out with a regular gig at Smokedaddy's in Chicago, and it wasn't long before Bob Koester of Delmark Records signed him to record a CD. Leaving Here Walking was a hit right out of the gate, winning Best Blues Record of the Year, from the National Association of Independent Record Distributors (NAIRD), the French Academie Du Jazz's Big Bill Broonzy Award, and two W.C. Handy Award nominations. National and international tours followed, as Burns played to enthusiastic audiences in clubs and festivals across the country, and in Europe, Canada, and Japan.

With three Delmark albums under his belt, and an upcoming DVD/CD release due in February 2007 Burns is primed to take his soulful, rockin' blues and R&B to a wider audience. His recently re-formed band includes South and West Side musicians, Anthony Palmer on guitar, E.G. McDaniel on bass, and James Carter on drums. As the Jimmy Burns Band, this tight group of veteran musicians rocks the house all night long.

Stuck In The Middle (With Band)

Back To The Delta