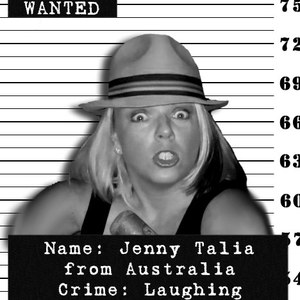 She is the daughter of Australian comedian 'Kevin Bloody Wilson'
She is married to an American (Diamond) and they have 2 young daughters (Macaroni & Magoo).

The following is from her Myspace site http://www.myspace.com/jennytaliafromaustralia

From the Outback of Australia comes a new brand of comedic talent that will blow your mind. Jenny Talia from Australia is a blond haired, blue-eyed, fast-talking, ball busting Sheila with an attitude, and that's on a good day! This feisty little woman has a voice larger than herself and an arsenal of material to make any woman proud and every bloke piss themselves laughing. Coupled with an amazing talent for writing songs that mirror the ridiculous realities in life, Jenny delivers a fresh approach to comedy as never seen before. Having just returned from another successful solo tour of Australia, Jenny once again is preparing to cross the pond for a limited number of headling shows. It doesn't stop there! The next 12 months will see Jenny Talia strut her stuff from New Zealand to East Timor - Chicago to Sydney. Jenny's just released third album, Without Adult Supervision, features the observational, ?CAMEL TOE?, the love song, ?DAVID BECKHAM? and the crowd favourite, ?NO MORE BUSH? Folks, there's a little bit of everything for every one. Jenny Talia is a proud advocate for equal rights so not only will she take the piss out of you, but she doesn't mind taking it right out of herself as well. Never before have you seen anything like her and surely she is something you'll not soon forget! ****** "She's bright, funny and easy-going, but you might think twice about introducing her to your mum and dad. Raunchy songwriter Jenny Talia is adept at addressing even the most taboo subjects with her cutting edge humour. Her reputation as a bawdy songwriter who doesn't pull any punches is on fine display in her 'must see' live show!" ****** "Witty & unique, and not to mention ball busting - she's a bloody funny sheila." ****** "She's my retirement fund!" - kevin bloody wilson ****** "With a voice as unique as a Harley Davison and a comedy style all her own, she's a hilarious hybrid of Billy Connolly, Bette Midler & and the drunk chick at the office party..." ****** "Hey Jenny, Thanks for the great show at the Langford, its so good to get out and have a good laugh, & that you sure know how to give. We love your new Cd,It even got my hubby laughing, so it must be good?? Hope you & your family have a safe trip home and we look forward to seeing you the next time you play in Perth." - patricia ****** "I WENT TO LANGFORD POSTERS TAVERN LAST NIGHT WITH MY MUM AND 3 FRIENDS, WE SAT UP THE FRONT, WHICH I LOVED, WE HAD A BLOODY BALL, YOU ROCK CHICK, YOU ARE BRILLIANT FOR THE SONGS YOU WRITE AND THE SHOW YOU PUT ON. HURRY BACK TO PERTH.IT WAS THE BEST SHOW I HAVE EVER BEEN TO." - charmaine ****** "just saw your show in Tamworth for country music festival. It was a top show and piss funny. Funniest thing I've heard for ages" - brett ****** "Was at the show in Glasgow in November and thought I would just let you know how fantastic it was I had never heard of you until that night and I have to say you had me in tears you were that funny.I bought your cds and played them all the way home. Thanks for a brilliant night keep it going" - Fiona ****** "my wife and i went to see you and your dad in Southend,you were fantastic.please keep on going.Please do me a favore and go to south africa so all my friends can see you THANK you. you're fucking good!!!!!!!" - anthony ****** "Saw u for the first time at Southend on the last show of the u.k tour and now a huge fan! Supurb! U rock!" - rachel ****** "GREAT SITE JEN, SAW YOU IN STOCKPORT.........CHIP OFF THE OLD MANS BLOCK.bRILLIANT" - kevin ****** "Hi Jenny you were fantastic on sat 3rd nov in ayr haven't laughed as much for years" - linda ****** "Hi there, Saw you in Tunbridge Wells on the 19th october absolutly brilliant as usuall Thanks for a fab show.." - daniel ******