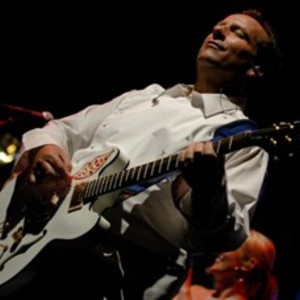 A great vocalist who can emulate the sounds of a young Brian Wilson, a student of the classic surf guitar style of a young Carl Wilson, and a power pop artist who has written and recorded with power pop luminaries such as Doug Fieger (The Knack), Bill Lloyd, and Marshall Crenshaw. Jeffrey has recorded roughly a half dozen CDs of his own Wilson/early Beatles influenced music. And he also has a "best of" disc called "Stars in the Sand" on the Pop Collective label.

Jeff is also a member of California's Papa Doo Run Run. Jeffrey has enjoyed a 25 year association with Brian and the Beach Boys, having spent 10 years as a sideman in the Beach Boys touring band and a key member of Brian's touring band. In addition to Brian himself, Jeffrey was one of a handful of musicians who performed at both the original Live Aid concert and the Live 8 sequel in Berlin.

Stars In The Sand