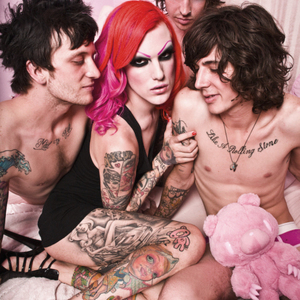 Jeffree Star (born Jeffrey Lynn Steininger, November 15, 1985), is an American model, fashion designer, make-up artist, DJ, and singer-songwriter residing in the Los Angeles area. He is a pop star known for his outrageous makeup and tattoos as well as his fashion line and from his transgressive, genderfuck and gender-bending appearance and persona while calling himself "Queen of the Beautifuls". Star has leveraged his fame as an androgynous model and aesthetic talents to launch his own clothing line and forays into acting and DJing.

Star was born in Orange County, California. His father died in his childhood thus Star was left alone while his working model mother went on assignments. He began experimenting with his mother's makeup at a young age, leading to an obsessive compulsive interest, and convinced his mom to let him wear make-up to school when he was in junior high.

Plastic Surgery Slumber Party 2006-2007
Star's music career as an electronica and hip-hop vocalist began when he befriended Peaches' drummer who encouraged him to make music. Star was then asked by Hollywood Undead to rap on their song "Turn off the Lights" for their debut album. However, the track did not make it onto the disc.

His first two solo tracks "We Want Cunt", named in tribute to his former screen name Cunt: Queen of the Beautifuls, and "Straight Boys" were co-written with Hole and one time M?tley Cr?e drummer, Samantha Maloney and singer Jessicka from Scarling. Star asked MySpace co-founder Tom to convert his MySpace profile into a music page so he could showcase his music.

On the 13 March, 2007, Star released his debut extended play Plastic Surgery Slumber Party which was produced by Ultraviolet Sound. The record topped at number one on the iTunes's dance charts and "has consistently topped the iTunes dance charts at #1, hovering high above household names such as Justin Timberlake and Cascada." Separately, Star's MySpace page has 25 million listens to Plastic Surgery Slumber Party as of July 2007.

During the summer of 2007, Star was advertised as a part of the True Colors Tour 2007,which traveled through 15 cities in the United States and Canada.The tour, sponsored by the LGBT Logo channel, began on June 8, 2007 to coincide with Pride month. Profits from the tour benefited the Human Rights Campaign as well as PFLAG and The Matthew Shepard Foundation. Though he was advertised as a special guest to perform on several West Coast dates, Star did not appear.[citation needed])

Cupcakes Taste Like Violence 2008-2009
Prior to the release of his second extended play, Star released his debut single "Heart Surgery Isn't That Bad..." on Valentine's Day, 2008, followed by its b-side, "I Hate Music", on April 17, 2008. Star later recorded and released "Starstruck" featuring Danger Radio - his first single available for free download as a "thank you" to fans] Trace Cyrus and Mason Musso from Metro Station originally provided vocals for the song, however, due to a feud between the band and Star, they were ultimately replaced with Andrew de Torres from Danger Radio.

Cupcakes Taste Like Violence, Star's sophomore extended play, was released on December 9, 2008. This is his first record to be available as a CD as well as digitial download.[36] This is also Star's debut record to be released under Popsicle Records through Warner Music Group's Independent Label Group. Star said the extended play "remindes me of myself. I may look sweet, but I'm really scary and violent on the inside."Cupcakes Taste Like Violence peaked at number six on the Billboard Top Electronic Albums and at number eight on the Billboard Top Heatseekers.[39] "Lollipop Luxury" was the first single from the extended play released November 18, 2008.

Beauty Killer 2009-present
Star's debut studio album, Beauty Killer, was released on September 22, 2009.[40] The first single from the album, "Prisoner", was released for digital download on May 2, 2009.[41] The track received two million plays on MySpace at the end of its second week being available for stream. "Love Rhymes With Fuck You" was the second single from the album; like "Prisoner", it was also released for digital download on June 30, 2009.[42] The album debuted at number 122 in the US Billboard 200 Chart. It also debuted at #7 in the US Billboard Top Dance/Electronic Albums Chart and fell to #12 on its second week.A music video for "Prisoner", directed by Robert Hales, was originally planned.[44] However, it has since been cancelled and replaced with "Get Away With Murder" which was filmed on November 7, 2009. The video premiered on the front page of MySpace on January 23, 2010.[45]

It was announced that recording was underway for Star's first studio album in late 2007.[46] He stated that the new songs "are more sexy, some are more "guy"ish and some are me screaming my heart out. I'm still finding what "Jeffree Star" really is. And I think I'm almost there..."[47] To "tide fans over" until the first single from the album was released, on April 21, 2009, Star released a remix cover of Black Eyed Peas' "Boom Boom Pow" which was made available for free download.[48] Morgan Page's radio edit mix of "Prisoner" was released for free download by Star on December 18, 2009. He worked with producers such as Lester Mendez, 3OH!3's Nathaniel Motte, God's Paparazzi[41] and more. Star performed at Warped Tour 2009 to promote some of the music from his album.[41][49]

Star originally planned a North American headlining concert tour, titled "I'm Cold, Keep Me Warm...Bitch!" for two weeks in December 2009. However, due to "personal things [that] have gotten out of hand in [his] family" the tour was cancelled. Star will be embarking on his "2 DRUNK 2 FUCK" 2010 world tour with BROKEncyde where he says he will "be going everywhere...and yes that means Europe and Australia". This will be his first headlining tour supporting the album. Dates have been officially announced in the USA, United Kingdom and several countries in continental Europe.

Star released his fifth single "Blush" (his second single-only release) on February 16, 2010. The song is a re-recorded Beauty Killer outtake performed only on Star's United Kingdom tour in 2009.

Star released two songs with label-mates Blood On The Dance Floor called "Sexting (Remix)" and "Inject Me Sweetly". He also released a cover version of "Bad Girls" by Donna Summer for the Turn the Beat Around OST.

Love To My Cobain (CDS)