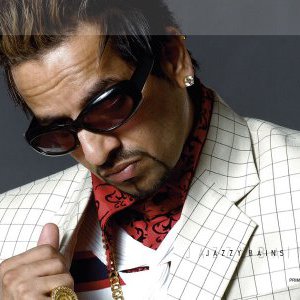 Jazzy B (given name Jaswinder Singh Bains) was born on April 1, 1975 in Nawanshahr, Punjab. Raised in Vancouver, British Columbia, he currently resides in Birmingham, England and is a transatlantic superstar who has introduced a fresh new image to the world of bhangra music. He was dicovered at the age of 18 by noted bhangra producer Sukshinder Shinda, who has gone on to produce all of his albums.

Since his debut album ?Gugian Da Jorra? in 1993, Jazzy B has become one of the most important names in the Punjabi music world of modern times. His sassy lyrics, recognizable voice, and hardcore street credibility have kept him popular ever since. He has aquired the tags of ?the original Folksta? ?the Canadian Sensation? and the ?Crown Prince of Bhangra? as he continues his revival of Bhangra in a big way while wooing audiences across the globe. Releases of hit albums such as ?Oh Kehdi? and ?Tera Roop? show that this megastar packs an enormous tidal wave of a punch.

Controversy with Jazzy B
There was controversy regarding the music video of Jazzy B's single "Soorma" in which the actors appearing in the video were known drug dealers who were later convicted of various drug related charges. The Hummer H2s featured in the video were also supplied by these actors and were later re-possessed by the federal government.
Visit Website : Jazzy B