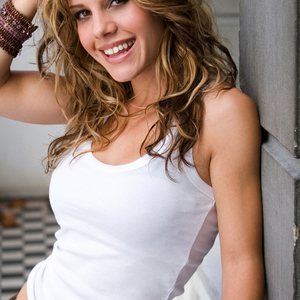 At just twenty years old, Jasmine Rae is a brand new talent with a very exciting future, following her huge win at the 2008 Telstra Road To Tamworth in January. She's quirky, she's funny, she's fresh and, even though she's small in stature, Melbourne-based singer/songwriter, Jasmine Rae has a powerful, professionally-trained voice that is hugely impressive. She has been a performer and writer since she was seven years old, when her poetry was sold at an independent fairy stall. She performed her first original song at eight years old and began vocal training at thirteen.

She's quirky, she's funny, she's fresh and, even though she's small in stature, Melbourne-based singer/songwriter, Jasmine Rae has a powerful, professionally-trained voice that is hugely impressive.


She has been a performer and writer since she was seven years old, when her poetry was sold at an independent fairy stall. She performed her first original song at eight years old and began vocal training at thirteen. When she was fifteen, Jasmine had the honour of performing at International Womens' Day.

In 2004, at sixteen, she was invited to perform with Melbourne's prestigious, brass band, The Moreland City Band. Jasmine took up the opportunity to sing live with ?real musicians? and became addicted to the rush of live performance.
In 2005, the band made a video clip of their version of the hit track, ?Killing Me Softly', featuring Jasmine's wonderful vocals, and also performed live-to-air on ABC Radio nationally.


It was the same year Jasmine graduated from High School and decided to learn more about making music. At NMIT, where she studied and completed her Advanced Diploma in Music, Jasmine mixed with more of Melbourne's finest musicians and now fully focuses on her career as a vocalist, writer and performer.

She first embraced country music in the late 90's after watching country music videos on pay television. She became the lead singer of alternate-country band, Jazz Lasso, in 2007, competing in the Battle Of The Bands Grand Final at Melbourne's Crown Casino. The diversity of the band members' various backgrounds from Rock, Reggae, Jazz and Country, helped create a raw and unique style of country music for Jasmine and, it was during that time, she wrote a couple of songs which will appear on her debut album.

One of those songs is her debut single, ?Country Singer' which she performed during her winning Telstra Road to Tamworth performance in January 2008. By winning this National Competition, Jasmine was given the opportunity to perform at one of the biggest music festivals in the world in June this year - the 2008 CMA Music Festival in Nashville. Over 200,000 people attended the event over four days this year. Jasmine also received a recording deal with ABC Music as part of the TRTT competition prize. She will release her debut album, Look It Up in September 6, 2008.

Rae's record deal with ABC Music presented her with the opportunity to record in both Australia and the US with two of Nashville's leading record producers.


?Country Singer' was recorded with esteemed producer, Richard Landis, who has produced hit singles and albums for US artists including Vince Gill, Eddie Rabbitt, Neil Diamond, Kenny Rogers and Juice Newton, as well as Australia's Steve Forde and Peter Allen. But the recording didn't take place in the US. The single was recorded at Electric Avenue Studios in Sydney with many of Australia's finest musicians, including Rod McCormack, Matt Fell, Glenn Wilson and Mick Albeck. It was also engineered by Australian, Paul McKercher.

Louie Shelton, who played on The Jacksons' tracks, ABC, ?I Want You Back' and ?I'll Be There'; The Monkees hit, ?Last Train to Clarksville'; Boz Scaggs classic, ?Silk Degrees'; and Lionel Ritchie's ?Hello', also contributed his considerable talent to the single.

Landis described Jasmine's session as ?one of great camaraderie, stunning musicianship and lots of laughter. Jasmine came equipped with far more than a great voice. She had cool production ideas and a really good understanding of who she is as an artist.?

?Country Singer' was released to media in May 2008 and Rae's video of the song appeared on the Country Music Channel in June.

Rae recorded four tracks in all with Landis, and then completed the album in June with ex-pat Australian producer, Mark Moffatt in Nashville, after her performance at Nashville's 2008 CMA Music Festival. Moffatt's credits include Keith Urban, Tim Finn and Nick Cave.

Rae also performed the Australian national anthem at the 3rd State of Origin game in Sydney in July, front of a television audience of nearly 2 million people.

Jasmine Rae's remarkable vocal talent has allowed her to stretch the boundaries in her debut album. It features a unique mix of raw country, country-pop and alt-country/blues. She's supporting the album release with a stack of appearances from now till the end of 2008 and beyond ? including appearances at the 2009 Telstra Road To Tamworth heats and finals throughout Australia.

Jasmine's Rae's debut album Look It Up is released on September 6, 2008 through ABC Music/Universal Music Australia

If I Want To