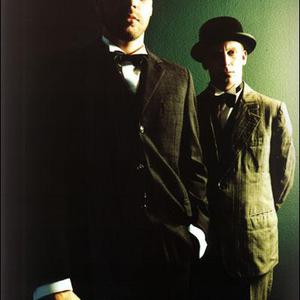 There is more than one artist with this name. 1) Janus is a Chicago based rock band who have released two albums; Armor (2004) and Red Right Return (2008/2009) with the band readying their third and latest release "Nox Aeris" on March 27th 2012. Singer David Scotney, guitarist Mike Tyranski, bassist Alan Quitman and drummer Johnny Salazar ? experienced great success with their 2009 label debut album, Red Right Return, but the band's new album, NOX AERIS, reveals how far they've come.

That musical revelation is the self-produced NOX AERIS, which drops March 27 on REALID Records (through Warner Music Group's Independent Label Group). The first single, ?Stains,? is already getting spins at WIIL (Chicago), KPNT (St. Louis), WBUZ (Nashville), WJJO (Madison), WWBN (Flint), KHTQ (Spokane), as well as SiriusXM's ?Octane? and ?Hard Drive XL.? Early feedback includes Zigz at WBUZ (Nashville), who says, ?If ?Stains' is a taste of things to come? then 2012 is going to be a great year for Janus. They've hit a new level with ?Stains'?this track is righteous.?

?Stains? explores what can happen when you don't follow your heart, the marks left on your spirit when you become someone you're not. ?It embodies what I was trying to say on the record,? says singer David Scotney, ?it's a dark point of view, but represents a cathartic process of self-healing.?

In 2012 touring news, the band's first round of tour dates will be with Chevelle and Middle Class Rut starting February 24 in Grand Rapids, MI. Additional dates will be announced in the coming weeks.

The record's title, which is Latin for ?night air,? comes from the 14th Century, a period where a third of the European population was killed off by the plague. Then, people believed going outdoors at night would cause them to succumb to the Black Death. While writing NOX AERIS, JANUS found this idea to be an apt metaphor for their own journey, preconceived notions of their own being flipped around as they became a bigger, more established band since the release of Red Right Return. NOX AERIS reveals who JANUS is and what they've gone through.

Red Right Return came out in September 2009 on REALID Records and spawned the Top 10 Active Rock hit, ?Eyesore.? They spent months on the road touring with Chevelle, Sick Puppies, Sevendust, Pop Evil, Halestorm, Five Finger Death Punch, and Alice In Chains. JANUS also sold-out numerous headlining shows of their own, appeared on MTV's ?Headbangers Ball? and performed in the biggest rock festivals in the U.S., including Rock On The Range. Absolutepunk.net raved about the album: ?There are a few bands, given the opportunity, could take the radio by storm. JANUS is a perfect example of this type of band. If they were given the chance, and played on some larger radio stations alongside all of our alternative ?favorites' (sound-alikes), they could earn themselves hordes of fans.? While Away-team.com hailed in a 9 out of 10 album review: ?Brilliant on many levels and impeccably engineered and produced to perfection.?

2) Janus is a German band consisting of two main members, Dirk 'RIG' Riegert and Tobias 'Toby' Hahn. They got their name from the Roman god Janus, who has two faces, so he is connected to conflicting nature. He is the god of beginning and end, doorway and gateway. That is characteristic for the band, on one hand their music is electrical andvery aggressive, on the other hand it is made smooth with classical instruments.
RIG is the creative head, the singer and songwriter of their lyrics which are in only German. Toby makes most of the music. As a perfect piano-player he is also responsible for the remixes. Of course there are some other helping members, first of all for their live performances.
The style of the music is not easy to define. Derived from their name the two faces aspect in their music is omnipresent. It is most associated with the gothic- and electro-scene but it also has a huge bunch of classical music parts. However the main focus is laying on their texts which tell about hate, mourning, despair, madness and all the fears living in most of us.

3) Janus were a UK band who had much more success in Germany than in their home country. Hard rock was the name of the game, and it is exemplified perfectly in the opening track to their sole 1972 album. 'Red Sun' is the song that prompted me to get the album after I heard it on a compilation tape some years ago. Guitars crash and the vocals soar to deliver a classic hard rock song, with a guitar solo every bit as good as the song deserves. After that opening it was always going to be hard to follow it, and while 'Bubbles' valiantly makes an effort, 'Watcha' Trying To Do?' just does not seem to fit in with the rest of the album, being much too light-hearted for a band with a skeleton on their album sleeve. Their piece de resistance, however, is saved for side two, which is totally taken up with the title track. They throw everything they can think of into the mix - flamenco guitar, orchestras, seagulls, and spooky lyrics all combine to produce a magnificent end to the album. But that is not all, as on the CD re-issue you also get a drastically re-worked - even heavier version - of 'Red Sun' along with three other previously un-issued tracks, stretching the album to almost twice its original length. It has often been remarked that it is a mystery why this band were not much bigger here in the UK, but whatever the reason at least we can now hear what Germany has long already known - Janus were a great heavy rock band.

4) Janus were an italian progressive rock band formed in 1975 but they released only an Ep in 1977, and it is one of the rare examples of progressive rock in right wing movement. After some changes in the line-up (guitarist Stefano Recchioni was killed during a political riot in 1978) they release in 1978 "Al Maestrale", in 1980 "Pescatore di sogni part I & II" and in 1981 "Note per un amico (A Stefano)
Danza dei lupi"

6) Janus or DJ Janus is an upcoming hardcore DJ/Producer from Holland. Mostly intrested in Artcore, UK and Early Rave. His main influences are Ruffneck and Ophidian.

Under The Shadow Of The Moon