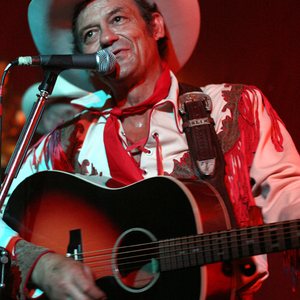 ?Folks, like I said before and it's STILL true, James Hand is the real deal!? ? Willie Nelson Though he's been making powerful original Country music for over forty years, until recently James Hand had unjustly remained one of American music's secret treasures -- a local legend in Texas, modestly plying his craft in countless smoky dives and dancehalls to a slowly widening circle of admirers. What he does, he does straight from his heart, taking the hard-won lessons that life and love have taught him and pouring them into his songwriting and performing.

Though he's been making powerful original Country music for over forty years, until recently James Hand had unjustly remained one of American music's secret treasures -- a local legend in Texas, modestly plying his craft in countless smoky dives and dancehalls to a slowly widening circle of admirers. What he does, he does straight from his heart, taking the hard-won lessons that life and love have taught him and pouring them into his songwriting and performing. James Hand sings like nobody but himself, his phrasing drawing out the pain and humor of his lyrics with an unpredictable yet soulful series of tiny inflections. His songs are equally mysterious and unclassifiable. While they are noticeably rich with the influences of his heroes -- classic country architects like Hank, Lefty, and Ernest -- Hand's songs are uniquely his, imbued with equal parts gallows humor and the ability to stare unflinchingly into life's darkest corners.

Today at the unlikely age of 55, Hand is just starting to receive the attention he deserves after having released his first nationally-distributed album in 2006, The Truth Will Set You Free, produced by Asleep at the Wheel frontman Ray Benson and legendary Texas producer and multi-instrumentalist Lloyd Maines. The album features confident, definitive versions of twelve of Hand's original compositions -- songs that are at once refreshingly unique and classically timeless. Now poised at the brink of national attention, if anything, he is more humble now than ever. ?The people around me really came through for me,? he says, with not a trace of affectation, ?The record company, my producers, and my band. In fact, sometimes I think the only person who hasn't been kind to me is me??


?In over 30 years of playing country music, I have never, absolutely never seen anyone as unique as James Hand. There is no one like this artist ? complex, yet simple. Simply, James Hand is country music, and he has no equivalent.?
? Bob Cole, Country Music Hall Of Fame '03, Hill's Caf?, South Austin, Texas

Born in Waco, TX, rodeos and country music surrounded James from an early age, and quickly became part of his daily life. The classic strains of Lefty Frizzell and Hank Williams made their mark on him, but a more substantial influence on his performing and songwriting has been life itself. ?I've been writing songs since I was kid ? since I was ten or eleven. Just the other day I found some songs in a little bitty envelope that my grandmother had tucked away into china cabinet. And with the life I've lived, there's no shortage of songs. They'll run out of typewriter ribbon before I run out of songs.?

?James Hand music uses no smoke or mirrors. There is definitely no glossing over of any aspect of this CD? James writes lyrics that haven't been written before and I suspect that he's lived every word in these songs.?
? Lloyd Maines

When it comes to writing and recording songs, Hand has learned a valuable lesson from his long nights playing endless sets for dancers in honky-tonks. ?You see,? he says, ?there are a lot of songs, the ones you feel like you've put your heart and soul into, that go unnoticed out on the dance floor. Ninety-nine percent of people want to hear something they can dance to and sing along with. If it's too complicated, they can't do that. Even when listening to records like this one I've made, people don't want to be overwhelmed ? it's just got to be understood.? With no artifice ? just his songs, his voice, and his life ? James Hand makes himself understood very easily. When he explains it, it sound so simple: ?A song and an album are absolutely worthless if people can't go home, learn it the song themselves, sing it, and know that they've felt that way some time or another.?

?You probably won't hear James on your country music station these days, but if you're one of the folks out there who loves true, honest, down-to-earth country music songs, based on hard life lessons and affairs of the heart, then James Hand is your man.?
? Ray Benson

Now after the last year of touring the US, UK, and Europe, and fulfilling his lifelong dream of appearing on Nashville's Grand Ole Opry, James Hand is now preparing to record his follow up CD on Rounder Records. Ray Benson and Lloyd Maines will again co-produce the project which will only include all new James Hand original songs. Plans for 2008 include the release of the new CD, the release of the James Hand Documentary, and extensive US and international touring in support of the new CD.

?The first time I saw James Hand I was shocked. He looked and sounded so much like Hank that I was frozen in my chair as I listened. His songwriting and performance style are real throwbacks to the sounds and times I truly love. He's a perfect gentleman and true Texas troubadour.?
? Darrell K. Royal

Shadow On The Ground