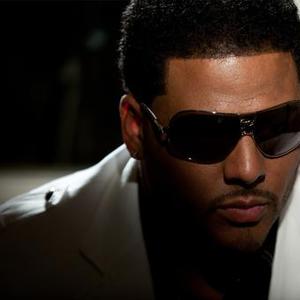 Al B. Sure! (born Albert Brown, 4 June 1969, Boston, Massachusetts) is an American singer, songwriter, and record producer. He grew up in Mount Vernon, New York and during the late 1980s, Al B. Sure! enjoyed a brief run as one of New jack swing's most popular romantic singers and producers. He is known for his trademark unibrow. Music career Brown was a star football running-back in high school, who later turned down a scholarship at the University of Iowa to pursue a career in music.

Brown was a star football running-back in high school, who later turned down a scholarship at the University of Iowa to pursue a career in music. Al's debut album, In Effect Mode, sold more than 2 million copies, launching the double platinum-plus LP to the top of the Billboard charts at the #1 position (R&B) for seven straight weeks. The album included his memorable "Nite and Day" single. In 1987, Quincy Jones selected Al as the first winner of the Sony Innovators Talent Search in a blindfold contest. Subsequently, Al would go on to work with Quincy on several projects; most notable, the platinum single "Secret Garden" from the album Back on the Block, a double platinum CD. Accompanying Al on this quartet were Barry White, El DeBarge, and James Ingram.

In 2000, ABS Entertainment launched a television development division by being the co-executive producer of the HBO Comedy Special with Jamie Foxx filmed at the Paramount Theater in Oakland, California. Al participated in the Bless the Children Foundation celebrity auction along with NFL stars Charles Woodson and Anthony Dorsett. Al was presented with the key to the city of Oakland by Mayor Laurence E. Reid's for his participation through ABS Ken-Struk-Shen in refurbishing the magnificent and historical city of Oakland, making October 19th Al B Sure! day. Currently Al has teamed up with ABCRN radio mogul and executive vice president Darryl Brown in addition to his Power House syndication team of experienced radio executives Edward Pearson, Hector Hannabal, and Vern Catron. They launched a new nighttime, celebrity-intense, romantic radio show titled "The Secret Garden" hosted by Al B. Sure! Al's vision for the Secret Garden Xperience is a journey into the soul of the listener, supplying non-stop, blazing-hot, romantic, current, and classic music, taking the captive audience wherever it desires to travel, as well as introduce them to the inside of the their favorite celebrity through intriguing yet stimulating conversation (reminiscent of NYC's legendary radio personalities Vaughn Harper and Frankie Crocker). Weekly visits from celebrity guests and intriguing personalities from every facet of the music, sports, television, and the film industries.

As a writer and producer, Al has generated some of today's most inspired and innovative music, including his music industry introduction of the multi-platinum group Jodeci, and teen R&B sensation Tevin Campbell, one of Quincy Jones's former prot?g?s. Al's introduction of Jodeci and production on its multi-platinum debut launched Al B. Sure! as one of the premier and decorative producer-songwriters in the history of the American music business. Al was also credited with introducing many R&B artists such as Faith Evans, Dave Hollister, Case, and Usher to the music scene.

Al B Sure! has a son, Albert Brown IV; a son, Quincy, with Kim Porter; and a son by a woman, thought to be named Tanya in Atlanta.[citation needed]