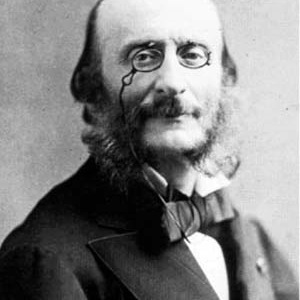 Jacques Offenbach (20 June 1819 - 5 October 1880), composer and cellist, was one of the originators of the operetta form, a precursor of the modern musical comedy. He was one of the most influential composers of popular music in Europe in the 19th century, and many of his works remain in the repertory. Offenbach was born in Cologne, Germany and was the son of Isaac Juda Eberst, a cantor, bookbinder, music teacher and composer.

Offenbach was born in Cologne, Germany and was the son of Isaac Juda Eberst, a cantor, bookbinder, music teacher and composer. His father was living at a time when the Napoleonic edict required that Jews had to take inheritable family names. An itinerant violinist, he adopted the name Offenbach since he was already known to his audiences as a native of Offenbach am Main called "der Offenbacher". His son received the name "Jakob Offenbach" at birth, though he changed it to Jacques when he settled in France.

Offenbach moved to Paris in 1833 to study the cello. He found employment playing cello in the orchestra of the Op?ra Comique, and wrote many pieces for the instrument. In 1844, he converted to Catholicism and married Herminie de Alcain. He returned to Germany with his wife and daughter in 1848 to avoid revolutionary violence in France, but returned a year later to become the musician most closely associated with the reign of Louis Napoleon (III). In 1850 he became conductor of the Theatre Fran?ais, but in 1855 rented his own theatre, the Bouffes Parisiens on the Rue de Monsigny, and began a successful career devoted largely to operetta and op?ras comiques until his death.

His most popular works are still performed regularly today. His best-known operettas in the English-speaking world are Orpheus in the Underworld, La vie parisienne, La belle H?l?ne, La P?richole, The Grand Duchess of Gerolstein. Ga?t? Parisienne is an often heard ballet score which is a pastiche of Offenbach melodies arranged and garishly orchestrated by Manuel Rosenthal in 1938.

Offenbach's final opera, The Tales of Hoffmann, was more serious than his other works, perhaps reflecting the eternal wish of the clown to be taken seriously. It was still unfinished at his death in 1880, but was completed by his friend Ernest Guiraud and premiered in 1881.

Offenbach is buried in the Cimeti?re de Montmartre, Paris, France.