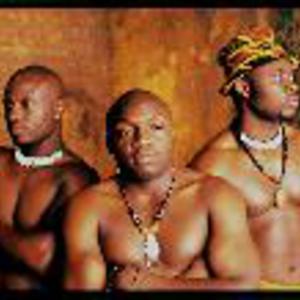 JABALI AFRIKA originates from East Africa's Kenya. The band's original sound, however, is attributed to its own unique mixture and special fusion of African rhythms. This is a truly multi-faceted band whose members are not only adept at composing songs, playing a variety of instruments, and blending their voices into a harmonious sound but, are also talented dancers and choreographers. The band's origin can be traced to the Kenya National Theatre Dance Troupe. In 1993, feeling unnecessarily censored, some of the members of the troupe became dissatisfied with the choices in their repertoire.

In their frustration, Joseck Asikoye, Victor Elolo,Justo Otongo, Evans Chagala and Robert Owino broke away from the troupe and formed what is known as JABALI AFRIKA.

The name was picked because the word Jabali is Kiswahili (Kenya's national language) for rock. This word was significant to the original members because they used to meet on a large rock in order to discuss how to advance their musical careers. Therefore, Jabali was an ideal name for the band. Since then Chagala and Owino have left the group. Through Perseverance, JABALI AFRIKA began to enjoy its first taste of success when the band was invited to play percussion in the United Radio and Television Network of Afrika (URTNA) awards. Not long after, the band launched its unique sound on Nairobi's National Talent Search (Star Search). The band went on to win the best traditional adaptation award in Kenya in December 1994. As a result of this achievement the band earned recognition al over Africa, as well as Europe, and seemed unbeatable. In the spring of 1995, the band was invited to headline the African Heritage Festival tour of Germany and Austria. The tour stopped at over forty cities, where in each city the mayor performed the festival's opening ceremonies. CNN Lifestyle even aired a feature of the festival's portrayal of the creative and dynamic side of Africa in the world today. To date, JABALI AFRIKA has toured Europe and Japan extensively, and recently the band has made its way to the United States of America. While in the USA they have played major festivals, including the HORDE festival in 1996. The group has also made appearances in Mr. Rogers' neighborhood, Good Morning America, BET and MTV and many other domestic and international television programs including the British Broadcasting Service (BBC) and Radio France International. In addition JABALI AFRIKA has performed at the Reebok Human Right Awards at the Winter Olympics Games 2002 in Salt Lake City / Utah. Also JABALI AFRIKA was featured in the Marley Magic tour in honor of the late Bob Marley. JABALI AFRIKA is Kenya's most international toured band and performs more than 250 shows per year; and with more than 70,000 records independently sold also the most successful band Kenya's. The band has released two CDs in Europe, and three in the United States entitled Journey, Remember the Past and Rootsganza. JABALI AFRIKA is definitely on a journey to success. The members of the band hope, that their eclectic sound will stand solid just like a rock, lasting long enough that future generations of musicians will be able to build their music using JABALI AFRIKA's sound as their foundation. JABALI AFRIKA is a sound that resonates throughout the world. Awards won by JABALI AFRIKA: Kenya National Talent Search winners - 1993 Best Traditional Adaptation, Singer of the Year awards - 1994, 1995, 1996 World Vision Thirty Hour Famine recognition award -1995 Cultural Ambassador award-1996, 1997, 1998 APCA (Association for the Promotion of Campus Activities) best diversity event - 1998, 1999. Operation Recovery Silver Award (Working towards healing the nation after the August 7, 1998 bombing of the US embassy in Nairobi, Kenya) - 1999