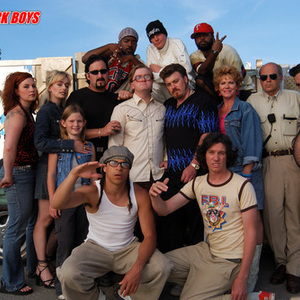 J-Roc (Jonathan Torrens), ne' Jamie, is a white rapper who, in earlier seasons, lived with his overbearing mother at the trailer park. He speaks in African American Vernacular English and very frequently uses the phrase "You know what I'm saying?" (pronounced, of course, "Gnome'sayin?") He often helps Ricky and Julian with their money-making schemes, acting as their fence: buying their stolen goods and selling them the equipment they need for their crimes.

He has dabbled in the porn business, directing at least three straight-to-video titles, including "From Russia With The Love Bone," "The Bare Pimp Project," and "Greasy Trailer Park Girls Gone Wild." He and his best friend Tyler (or T., as he is often called) fathered children with two different women between seasons five and six, but since neither one of them knew who fathered whom, they agreed to both be the children's fathers. Although they are not sure the father is, the white female has a black baby and the black female has a white child. The decsion to raise the children together only stems from the idea that J-Roc believes he is black. Trademarks: Pasty white skin, his best friend T., the Roc-Pile (his crew), and his refusal to participate in gun fights.

Muzik To Ryde To