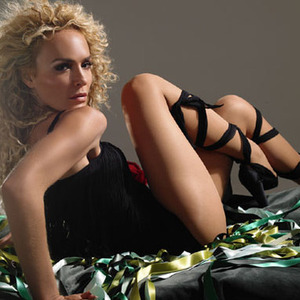 Ishtar (born Esther (Eti) Zach, on 10 November 1967 in Kiryat Atta, Israel) is an Israeli-born pop singer who performs in Arabic, Hebrew, French, Spanish, and English. She debuted in 1996 and is best known for her work as the front vocalist of the French-based band Alabina, and her solo pop hits such as C'est la vie, Last kiss, and Habibi (Sawah). She speaks and sings in Arabic, Hebrew, French, Spanish, and English; in addition, she says she "half-speaks Moroccan".

She speaks and sings in Arabic, Hebrew, French, Spanish, and English; in addition, she says she "half-speaks Moroccan".

Ishtar began performing in clubs at age 14 and continued even while enrolled in the IDF. Though she was born Eti Zach, she chose the name 'Ishtar', a Mesopotamian Goddess, because her grandmother called her Ester, which "with her Egyptian accent it sounded like Ishtar", she said.

It was around this time a friend asked her to join them in France. She soon fell in love with the country and decided to make it her home.

Alabina Years:
Once she moved to France, Ishtar began working as a backup vocalist for several flamenco type acts. It was here she was discovered by Charles Ibgui who, enamored with her voice, introduced her to Los Ni?os de Sara. She joined the group as a lead vocalist and together they performed under the name Alabina.

Alabina soon became a worldwide success charting in the top 10 and top 40 several times in the US alone.

Alabina had found success mixing Flamenco, Arabic, Pop, and Dance sounds. Los Ni?os de Sara usually sang in Spanish while Ishtar would sing in Spanish, Arabic, French, Hebrew, or a mix of the languages ? several songs were sung in Spanish and Arabic.

Solo Career:
Despite Alabina's success, after two albums Ishtar decided to do a solo project of her own (though still a member of the group); Los Ni?os de Sara also began to release CDs of their own.

In November, 2000 La Voix d'Alabina (The Voice of Alabina) was released. It stepped up the Oriental pop sound while mixing in some traditional Arabic sounds and dance beats. Nine out of the twelve songs were mainly in French though Arabic, Spanish, English, and Hebrew were mixed in on various songs (for example Last kiss was in English). Several of the tracks found dance floor success, including Last Kiss.

Ishtar also paid a visit to her fans in Israel, where she hosted a few television shows, singing duos with local stars such as Pavlo Rosenberg, AVIHU MEDINA, and David D'Or.

Ishtar continued to tour the world with Alabina for the next few years as she worked on her second album, Truly Emet, which was released in August, 2003 this time with most of the songs being in Hebrew. However she decided to sing more songs in mixes of Arabic and Hebrew to show that there could be harmony between the two cultures. Truly Emet was again a dance floor success especially the songs C'est la vie, and again Last kiss.

A few more performances were done with Alabina, though as of 2005, the group had seemed to disband by no longer actively performing or releasing new music.

Ishtar's third album, Je sais d'o&ugrave; je viens (I know where I come from) was released in November, 2005. This time the music was still Oriental pop, however much less dance. More hip hop-type beats were stirred in with the Arabic music. Most of the songs were sung in Arabic, four were sung in French, and a few in English, while Spanish and Hebrew could be found throughout the album. Again she found dance success with such singles as Habibi (Sawah), which for the first time in her career featured a rapper JMI Sissoko.

Shortly after a greatest hits CD, The Alabina Years, was released, featuring a mix of Ishtar's solo hits, her Alabina hits, and some new English tracks as well.

Ishtar currently lives in France and is working on promoting her album "Best Of".