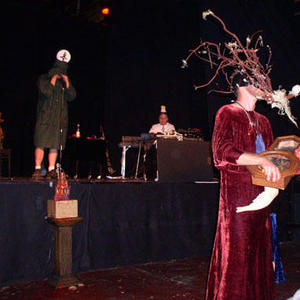 irr. app. (ext.) is the expanding sound experiment for a San Francisco, CA based multi medium artist by the name of Matt Waldron. He began his musical endeavors in 1989 at the age of nineteen, though he wanted to start making music long before then just never had the finances to begin. First starting out, merely collecting sound sources on a "boom box" type recorder, he would record from one deck to another adding a new ?track/layer' with each session, and soon found a lot of inspiration from Nurse With Wound's A Sucked Orange.

The surreal sounds and twisted ambience that dance about irr. app. (ext.)'s musical tracks can easily be seen as another extension for the massive creative side that Waldron has, seeing that he has also been very much a visual artist since early child hood. As a visual artist his paintings and charcoal and pen and ink works are nothing short of extremely skillful products of the subconscious or perhaps dreams, and seem to express imaginative thinking beyond the norm. Waldron has also been known to work with installation 3D pieces as well as working with set design and costumes for his live shows as irr. app. (ext.). irr. app. (ext.) collaborations are very broad and here is a list of a few artists that he has recorded works with: Stephen Stapleton a.k.a. Nurse With Wound, Stilluppsteypa, Jim Haynes, R.K. Faulhaber, Wyrm, At Jenny Richie, and not to mention all of the appearances on a multitude of various artist compilations. Waldron hasn't had the best track record when it comes to him releasing his own material. After several attempts to get his music out there, it seems he has finally found some reliable outlets. His earlier attempts failing are due to various reasons one of them being that a distributor went bankrupt, and another was that a label owner died. Luckily Waldron got it right when he signed to Helen Scarsdale, and now he seems to have a residency on Beta-lactam Ring Records. BLR Records decided to put out a lot of his older material that never made it to the light and will more than likely be putting out new material when Waldron has it ready.

Observation Affects The Outcome (With Umpio)

4 Orphans (With Nurse With Wound)

Resurrection Of The Senses (EP)

Knowing Me, Knowing You (EP)