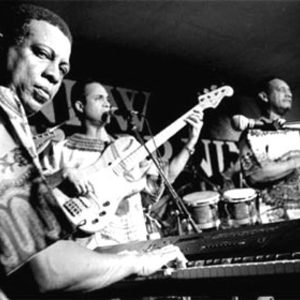 Irakere (Yoruba for "vegetation") is a Cuban band founded by pianist Chucho Vald&eacute;s in 1973 that won the Grammy Award for Best Latin Recording in 1980 with its album Irakere. Its members included flutist Jos&eacute; Luis Cort&eacute;s who later founded NG La Banda, percussionist Anga D?az who later went to France, percussionist Fran Padilla who later moved to Spain, saxophonist Paquito D'Rivera who left Irakere and Cuba in 1980 during a tour in Spain before moving to the United States. Trumpetist Arturo Sandoval went to the US in 1990.

Irakere, perhaps the most recognized modern Cuban ensemble, burst onto the international scene as the first post-revolutionary band - still residing in Cuba then - to be released on a major US record label. Essentially an assembly of Cuba's greatest young jazz musicians, the band evolved out of the conservatory system to become one of the most innovative ensembles in Cuban history. Their blend of Afro-Cuban tradition with jazz fusion proved ground-breaking and illuminated the richness and complexity of the country's music.

The Best Of Irakere