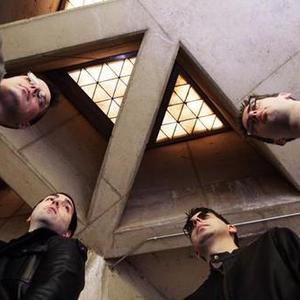 Interface is an electronic music act based on Long Island, NY. It was founded in 1993 by Eric Eldredge (keyboards, sequences, and vocals). Its career has been lined with a steady output of songs and dance remixes for other artists and an active tour schedule (Eric is joined onstage by live additional musicians). Each of its albums display a blend of various styles of electronic music, most notably trance, synthpop, electro-industrial and aggrotech, with a strong sense of melody and songwriting. Interface is currently signed to Nilaihah Records in the USA.

Other artists named Interface could refer to:

1. A Christian rock band based in Ft. Myers, Florida.

2. A Hollywood-based remixer, producer, and sound designer. Remix artist Julian Synne contributed several remixes in the 1990's for Cleopatra Records, mostly for it's extensive line of tribute albums, as well as a widely downloaded remake of New Order's "True Faith".

3. An late 80's/early 90's dance group from Holland that had minor club hits in Europe such as "Human Cry" and "Plastic Age"

5. An improvisational one-off music project, who released the album "Swank" in 2001.

7. An Slovak melodic death metal band with progressive influences, on last.fm can be find like Interface (SVK)

8. A German berlin school, trance and smooth jazz project on Innovative Communication that existed from 1992 to 1998. ? band of Michael Gross and Marcel Thebach until 1993. Marcel Thebach leaves Interface for his own releases on IC making it a Michael Gross solo project.

Where All Roads Lead

Bind Us To You

The Beauty of the View From Here