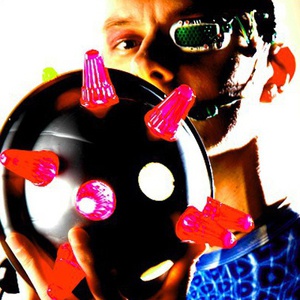 http://wisdomcore.com Originally from space, MIRAI ('Future Boy') is the founder of the neo-futurist network 'Intelligentsia' - its prime directive to bring together artists on the vanguard, with an amalgamation of innovative philosophy and positive future. Mirai spent his teens designing video games in the U.K, released over 10 titles from age 14 onwards, and then moved onto music, video & fashion during the growth of the rave culture, where he began to group in numerous members into his unit.

His first gig was in Camden Palace, London in 91, and has done over 30 live events since then including the Interactive Live Show tour with P-Model (Warner), Yokohama sports stadium, Toucho Skyscraper, The Alfa festival & E.Live in Holland & Emotions in Belgium. From '95 he relocated to Tokyo, writing soundtracks for Japanese video games, club mixes, TV & radio. Mirai has been a videogame character & model, co-hosted a 1 year EM radio show, written for 'Keyboard', has done various media spots and thru 10 years of Intelligentsia has teamed up with a motley bag of musicians and artists, always pushing against the status quo.In Japan he had a political party named after him, and was the first person to perform a techno live using a mobile phone. Mirai's recent work includes the global artist series 'WorldWideKind', Enix PS2 level designs, and interactive music for Morley Robertson (J-Wave Radio) & Yamaha techno Ringtones. He currently creates for Arvato Mobile Germany & Arkaos VJ, and was voted the top Tomb Raider level designer. Now back in London, with the release of the space opera album 'CIVILIZATIONS', a long held agenda: EARTH ACADEMY is finally realised.

The Other Side of the Screen