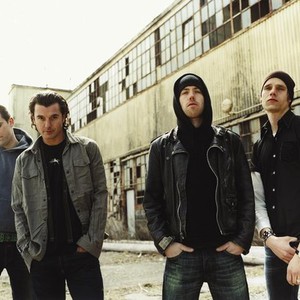 Institute was an alternative rock band featuring Bush frontman Gavin Rossdale and members of Rival Schools and Helmet. The band's only album, Distort Yourself, was released September 13, 2005. As Gavin Rossdale put it, the last couple of years have passed fairly quickly...astonishingly so, he reveals with a small laugh. "Well," he begins, "I got married, I lost a band, and I gained a band." This might be a tiny bit of oversimplification on Gavin's part.

As Gavin Rossdale put it, the last couple of years have passed fairly quickly...astonishingly so, he reveals with a small laugh. "Well," he begins, "I got married, I lost a band, and I gained a band." This might be a tiny bit of oversimplification on Gavin's part.

Best known for being the singer and songwriter for the multimillion-selling British rock band Bush, in recent years, he's been the subject of the international tabloids as part of a famous marriage to Gwen Stefani of the bandNo Doubt, enjoyed roles in such movies as Constantine and The Game of Their Lives, and he has a new band with a new record.

But this new project is something quite different. INSTITUTE is a new group, and Gavin is eager to point out that the band's debut full-length album is very much a product of collaboration. "INSTITUTE is not a solo thing," he says, "because I didn't do it alone, just some of it" As he explains, the word "institute" refers to a "cultural collective": Far from being a "solo project," INSTITUTE was a product of everyone's input and suggestions. Although Gavin brings his distinctive vocals, guitar playing, and lyrics to the album, INSTITUTE also sparklingly showcases the New York-based talents of guitarist Chris Traynor (who had also played with Rossdale on the last Bush tour, also a member of Helmet and formerly of Orange 9mm), and bassist Cache Tolman (formerly of Rival Schools, CIV). Notably, this debut album was produced and guided by Helmet's main-man, Page Hamilton, whom Rossdale had long admired. And finally Charlie Walker on drums, a local musician from Brooklyn where they all live.

Gavin's last record with Bush was 2001's Golden State, and the band quietly dissolved shortly after guitarist Nigel Pulsford announced his intention to stop touring ... which, in turn, presented Gavin with a challenge. "Upon returning to Interscope Records," he says, "I had to decide if I was going to do the 'sensitive' solo record, or should I go and try to take it one step further and make the music harder? Upon meeting Page, we seemed to really understand each other and bond really quickly."

And the decision to write heavier songs was a natural, and seemingly inevitable one. The resulting album is a collection of twelve songs that showcases the best in its creators' abilities, as well as revealing some unexpected developments. INSTITUTE is, as can be expected from the involvement of Hamilton, supremely crushing and heavy when it cares to be (witness "When Animals Attack" and "Come On Over"). Yet, Gavin Rossdale's famed emotionalism and singular ability with a hook also comes to the fore of these songs, resulting in melodies that act as a swift punch to the gut ... while also causing heartfelt reflection.

"I think it's cool to have all that power with the band's music, and yet at the same time have all these potentially vulnerable moments in there," Gavin explains, pointing out that his songs "Save the Robots" and "Ambulances" are "delicate, and not really bombastic." He admits that he had some hesitation showing the songs to his producer, only to be surprised when Hamilton showed him encouragement. (Helmet aren't known for tender balladry, after all.)

Acknowledges Chris Traynor, who has played in both Bush and Helmet, and who now is firmly tenured in the new INSTITUTE, "I've had people who weren't fans of Bush but who have heard the new tracks say that it's really amazing that someone like Gavin, who could have gone in a super 'pop' direction in this stage of his career, would choose to do something more 'real,' like what we've done on this album. I think that that's going to be the impression that most people will have." If anything, there's a depth and widescreen beauty to the production that lends itself well to such tracks as "Information Age" and "Wasteland."

They are spacious and breathtakingly moving sonically, even while the album's first single, "Bullet Proof Skin," is as hard-hitting and direct as anything Rossdale's tried his hand at previously in his career. "I think that rock music should be for both boys and girls," allows Gavin. "I'm very interested in getting this hybrid correct: I love the drama of loud guitars, and I want to combine them with a sexy enough groove, something almost dub-like, and watching it rise to the next level."

Will Bush fans like what Gavin's done with INSTITUTE? The frontman certainly believes so. "I think that the two are intrinsically different bands, because they're really made up of very different people. I'm lucky, because I like those guys in Bush, and I really like the guys I'm working with now. I just feel like it's music for a different time, although I was never going to completely change the style of the music. I wanted to strip it down, but I didn't quite know where it was going to go. You never really do, you just have to do it."

Unfortunately, in April of 2007, Gavin Rossdale declared that Institute was breaking up and he would start pursuing a solo Career.