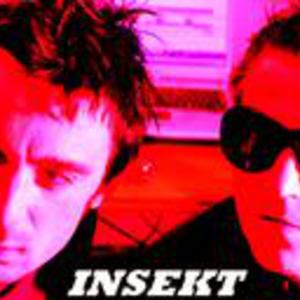 The follow-up full length CD "Stress" consolidated their talent and pushed them onto the forefront of the underground scene, especially after the cult band U2 proclaimed Insekt as their favourite electronic act, a compelling reference that definitely opened new doors exposing their music to an even wider audience. A success that continued to grow culminated by an extensive European tour for the promotion of their 3rd hyper innovative studio album "Dreamscape", and ultimately crowned by the explosive release of the live album "Live Creeps".
At the end of 1994, after the band's 5th album "In The Eye", and after steadily touring throughout Europe, Eric and Mario both felt the urge to cryogenically suspend the Insekt and focus on their respective (solo-) projects. Mario contributed vocals to Lowpass (2) and signed to a major label, while Eric set up Monolith and joined Dirk Ivens in Sonar.
Resurrected for the legendary Belgian Independent Festival in December 2003 in Antwerpen, Insekt's high-energy performance left everyone breathless. The duo received such a tremendous response from hardcore elektro fans and European booking agencies alike! There was now a new feverish and unstoppable demand to keep the Insekt alive and accentuated by a steady stream of invitations to perform at various festivals. This overwhelming demand forced Mario and Eric to face the truth: Anno 2004? the Insekt is back and more alive than ever!
While they are still working on their brand new studio album, and to satisfy the fanbase's impressive demand for more, we are proud to present the new "Ohrw?rmer" live album that has captured and immortalised the intense stage presence and force of the now metamorphosed alien Insekt. Featuring 8 incredibly intense live tracks along with 3 new exclusive studio bonus tracks (includes a kicking cover version of Depeche Mode's hit "Personal Jesus").
The perfect occasion for Insekt to reunite with the electronic fans and inaugurate their own record label Psycho Dynamics ? marketed worldwide by Alfa Matrix.
URLs: http://www.insekt-online.com/
Members: Eric Van Wonterghem, Mario Vaerewijck