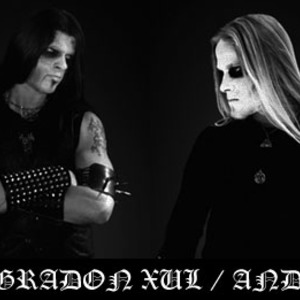 1) The Dutch Black Metal band Infinity consists of 3 members: Balgradon XUL on drums, bass and vocals (Non Essence Genesis, ex-Ornaments of Sin, ex-Haatstrijd, Funeral Winds, Corpsecandle), Andras on guitar (Weltbrand) and Draconis on guitar and vocals. The band has released 2 demos and 3 albums, and a 4th full-length is ready to be released.

History:
1995
Infinity was formed by Balgradon, Draconis and Nebiros.
After several line-up changes, gigs and the first demo "Corvus Corax" ('98) Draconis and Nebiros left the band because of personal reasons.
2001
In the winter of 2001 Balgradon recorded 4 songs in his "Vortex Studio" (Zevenhuizen, the Netherlands). After the recordings Quasar joined Infinity as guitarist and in a few months time they wrote several songs for the first full-length album.
2003
"Nostalgia for the Dark Age" was released through Spectral Arts Productions.
Andras joined Infinity as second guitarist.
2004
"The Birth of Death" was released through Total Holocaust Records.
2005
"Enter thy Labyrinth of Hell" was released through Total Holocaust Records.
2006
Quasar left Infinity. Balgradon and Andras started writing new material.
2007
Infinity performed some live gigs together with RSDX and PZ of Weltbrand.
Balgradon and Andras composed & recorded the 4th album together.
Draconis joined Infinity again and will be the second guitarist for the coming live gigs.


2) It all started when Birgitte Moe (24 years old in 2000) was going to audition for an other Norweigan danceband Devotion. Then she heard that Kjell Gabriel Henriksen needed a singer for his band, after a lot of hard work she finally convinced him to let her try singing. The band was at the time named Barbie-Q and consisted of three rappers and a vocalist. When Birgitte joined the group they changed their name into Infinity.

Their first album Www.Happy-Poeple.net was somewhat quite succesful. It went straight to #1 just after release selling more than 30.000 copies in Norway. The following album was planned to be Www.Sporty-People.net, the corresponding website had even been created ! But for some reasons, it had never been released (apart from one single called Boys And Girls or 1-2-3-4). Instead there was an album entitled Naked In The Rain, still featuring the voice of Brigitte, the same happy euro style as the previous one. The two singles from this album were covers of the old D.A.D. hit Sleeping My Day Away (also covered by Me & My) and Naked In The Rain.


3) Other band with name Infinity is from Czech.They play eurodance, trance electronic.
Their biggest hits are Let me go and Never more. You can listen it on Danceradio.
They have new hit Understand Me (played by AvB in A State of Trance)

4) This artist from Greece has been featured on plenty of compilations, and will soon release his debut album.


"Infinity" was also the tracking handle of an early-90s demoscene musician, member of the group "TCB," who composed at least some of his/her tracks in the little-used PC module composer "Whacker Tracker."

The Arcane Wisdom Of Shadows

Nostalgia For The Dark Age

Naked In The Rain