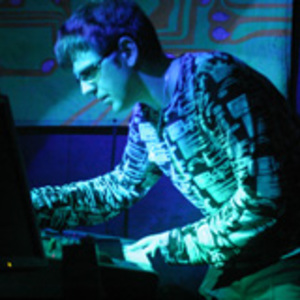 In'R'Voice - means Inner Voice, where letter R means Resonance. Officially declared by the leading Moscow's DJ's and a cult Radio station "Station" 106.8 as the very first Russian Psyhedelic Trance project in 1996. In'R'Voice began his music journey in 1992, has 16 albums in total including EPs and near 50 tracks on compilations in UK, Germany, US and Russia. In'R'Voice was awarded by the Ministry Of Culture Of Russia for the innovations in music.

Despite coming up on a major labels like New York's System Recordings under his own name - Den Kozlov, the man behind Inner Resonance Voice still running it as one of his main projects. Den never seem to run out of the fresh ideas, as every single album of the project has a different approach to style and sound. Keeping the blend of Depeche Mode versus Skinny Puppy - his most influences in his music, and mixing the deep melodic atmospheres with electric and heavy tek-psychedelic sound makes In'R'Voice truly unique and built a big number of followers and funs. Den doesn't disappoint his listener, constantly creating new music for almost 19 years through projects like In'R'Voice, Den Kozlov, Peace Data, Karmahacker, Emotion Code and many more side projects. Next In'R'Voice release "Bittersweet" is due later this year, and a single "Air" is already being released on Uber Trend's "Psychedelic Purple" compilation (www.myspace.com/ubertrendrecords).
All In'R'Voice's 16 albums are free to download without any restrictions at his website www.denkozlov.com . Enjoy!

The Scent Of Russian Dreams