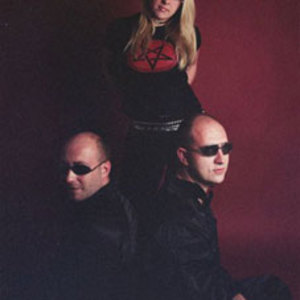 1) A Belgian ebm / electro-industrial band. 2) A Hungarian drum and bass producer / DJ. 3) A Croatian 'drum and bass' producer / DJ. 1) An 'ebm' / 'electro-industrial' band (formed 1992, in Belgium), incubated for four years, with influences: Front 242, Klinik & Front Line Assembly. In 1996, they released the Fun single, immediately followed by the d?but album - Soft Flesh-Hard Steel - both on Celtic Circle Prod.. The label also marketed the follow-up, BrainFX, MCD in 1998, just prior to it's collapse.

1) An 'ebm' / 'electro-industrial' band (formed 1992, in Belgium), incubated for four years, with influences: Front 242, Klinik & Front Line Assembly. In 1996, they released the Fun single, immediately followed by the d?but album - Soft Flesh-Hard Steel - both on Celtic Circle Prod.. The label also marketed the follow-up, BrainFX, MCD in 1998, just prior to it's collapse.

In 2000, they band inaugurated the new millennium with the disturbing album Kmputor, released by Flatline & upon which they revealed an upgraded sound, moving away from their dark elektro roots, towards a more dance-oriented form of electronic music (incorporating goa trance influences & more). A mutation that became even more distinctive on the following double-CD album ?Unidentified Flying Frequencies?.After the demise of FLATLINE RECORDS, IMPLANT returned to Belgian grounds and joined hands with the newly formed but promising Alfa Matrix label. This new collaboration immediately resulted in the ?All I Want? single on the split-album ?Square Matrix 002? which announced the band's 4th album ?Planet Euphoria?, a release that caught the attention of fans and journalists alike for its trancier vibe, crowned by the vocal collaboration with Canadian female singer Jennifer Parkin (Ayria, Epsilon Minus) throughout the entire CD.

The end of 2003 came the release of the ?Horseback Riding Through Bassfields', an album that triggered so many questions, not only about the unusual CD title, but also about the direction and ultimate meaning of IMPLANT itself. This album was clearly marked as a turning point in the band's career, offering a sort of looking glass as to where IMPLANT has been and a glimpse at were they are possibly going. An album that successfully returned to the band's darker roots progressing further towards intelligent electro, while still offering a solid dance edge. On this new CD, mastermind Len Lemeire teamed up with Myriam Kuliasko, a classical trained jazz singer and was joined on stage by Nicolas (Empusae) on African drums.

The intimate ?Self-Inflicted? is IMPLANT's album of maturity on which Len Lemeire once again explores, expands and redefines the limits of his musical spectrum to the maximum. Listeners will discover a special attention that has been reserved especially for the album's strong vocal performances. modern electronics, sexy female vocals, harsh angry male growls, computer generated melodies, carrying upbeat rhythm patterns and IMPLANT's signature sample manipulations are all on the extended list of the ingredients that make this passionate and provocative album an exploding and eclectic musical cocktail. Official site: http://Implant-Nusic.Be

2) A Hungarian drum n bass producer / DJ, who has been involved in scene since 2002, under this alias as a DJ, promoter & producer. In 2005 he started writing record reviews for ImpulseCreator (drumandbass.hu) as his attention moved towards the soulful edge of dnb. While playing he is personally aimed at creating a warm, sublime atmosphere in the club to keep the crowd entertained. Before his debut official release on Misspent, he was featured on different free releases such as drumandbass.hu 9th anniversary Spotlight album. Currently he is working on garage/d&b tunes with various vocalist talents, taking his music into new, diverse directions. Supported by O. Lightwood @ Santorin, DJ Ren, Mentalien and others. Official site: http://mySpace.com/ImplantDJ

3) Aka Vedran Zenzerovic (born in 1984, in Split, Croatia), is coming from hardcore an metal background. After a few years playing in several bands he decided to start working on electronic music and getting into all around music production. At age of 16 in 2000 he started to do some Hip-Hop, IDM and Dub projects but after a while he discovered DNB and started to do more and more DNB tunes. Getting more into DNB world he got his first gig in club "Kocka" where he met VJ Xplode.

Then the LoopJunkies team was formed, the audio/visual team choosing noisy and fast type of music, mostly DNB. They have been performing since 2004. starting at indie club "Quasimodo" with series of parties called "Loopjunkies attacking your town". Now they are residents for drum and bass in club "Kocka" with series of DNB parties called "Karantena" where they had guests from all over world. They are also the creators of DNB summer festival called "Burning the beach", series of techno parties called "Projekt" and "Beatslap" program that was introducing new music.

2007 was a big year for Implant getting a first Croatian DNB release with his free EP "Get Mad" on Black Hoe Recordings, that was the start of his DNB career. Later that year he got signed on Nightmare Recordings and released on 2 VA compilations with tunes such as "Son Of Satan", "I.Bitchbot" on album "The Lustful" and "Drug abuse community" on VA album "3". Making collaborations with Zero Method, Kr4y, Identity, Treo and Recall he is starting to get appreciation from artists and DJs all over the world.

In 2008 he started to work as a sound technician and organizer in club "Kocka" and had a number of performed parties all over the Balkans, Ireland, Austria and Spain behind him. He released his first bestseller on Digital Tunes, "Fuck The Funk" with Treo on Temper D Productions. Later on he released EP "The Addict" on WaySide Recordings with tunes such as "Smoke", "Tryptamine", "Amussia" and "Green" . Same year his tracks "Angry Motherfucker" and "Collapse" appear on another Nightmare Recordings VA album "Hoarders & Wasters".
In 2009 he gets signed to Human Soul Recordings and releases "Affray" and "The Rapist" on self titled single "Affray Ep"
Now in 2010 he is releasing his first album called "The Blue scout" on WaySide Recordings with featured artists as Identity, Treo, Kr4y, Recall - expected for release 15 May 2010. Official site: http://Implant-Music.Tk / http://SoundCloud.com/ImplantDnB