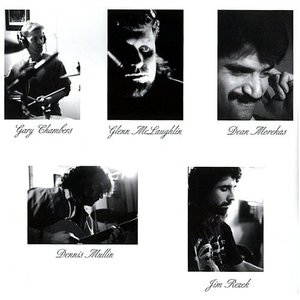 The music of Iluvatar (i-LOO-va-tar) cannot be accurately summed up with a casual phrase or label. Having a solid foundation in rock music, Iluvatar combines different elements from other genres such as jazz, classical, and psychedelia, and weaves them into sound tapestries that, while pushing the boundaries of the standard rock formula, remain very accessible, even radio-ready. Although often incorporating extended instrumental passages, time signature shifts, strong dynamics, and sometimes unconventional arrangements...

Taking their name from a character in J.R.R. Tolkien's novel "The Silmarillion", this Baltimore, Maryland group consists of:

The band's roots go back to the 1983 and a local progressive rock cover band called Sojourn. Many of the songs and lyrics on the first album, as well as a few on the second, were written or co-written by original Sojourn guitarist Tom Kraus (currently a member of Brave New World). Tom left the line-up when Sojourn mutated into Iluvatar in 1992.

Iluvatar began performing live in the Baltimore area and quickly acquired a steadily-growing following of devoted fans. Though the primary focus of their live performances was on their original compositions, the band occasionally accented their sets with music from Genesis, Marillion, Pink Floyd, and Styx.

Iluvatar's self-titled debut CD was released on Kinesis Records in November 1993 and quickly became the label's top-seller. Iluvatar soon began to receive international recognition for their work. Iluvatar re-entered the studio in March 1995 to record "Children", their second album for Kinesis, with Dean Morekas replacing original bassist Mick Trimble. "Children" firmly established Iluvatar as one of the premier American bands in the 90's progressive movement. Following the release of the album, original drummer Gary Chambers left the band and was replaced by Rick Fleischmann who can be heard on some of the live tracks on 1997's "Sideshow" CD, a collection of live tracks, alternate versions, and unreleased material. Allen Brunelle (currently with The Dark Aether Project) played drums on the subsequent Sideshow international tour in '97. Drummer Chris Mack has been with the band since December 1997 and plays on the latest studio CD "A Story Two Days Wide".

In addition to numerous headlining shows, Iluvatar has played before progressive rock fans at both ProgScape 94 and 96 in Baltimore, one of New York City's ProgNights in 96, ProgDay 96 in North Carolina, and ProgEast in Quebec Canada. They played to packed theaters in Buenos Aires, Argentina in September 1997, and performed in Mexicali Mexico at BajaProg 98 as well as NEARfest 2000 in Bethlehem, Pennsylvania.