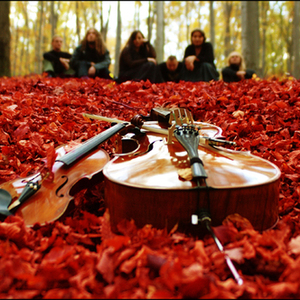 The group came into being in D?bica, a small town in the south of Poland, in early autumn 1998. It was started by Aleksander Kozio? (guitar) and Jan Tr?bacz (vocals, guitar). Soon they were joined by Antonina Kraszkiewicz (cello) and Patrycja Pyzi?ska (violin). Aleksander Kraszkiewicz (bass) and Szymon Grych (drums) completed the line-up. The band's goal from the very start was to play heavy music with a positive message. Their first live performance took place in November 1999 at a local festival in D?bica.

Illuminandi recorded two demos; Demo I (four tracks) in 2000 and Demo II (3 tracks) in 2002. Demo II caused some stir in the underground press and eventually got the band signed to Bombworks Records, which in 2005 released the two demos together with a couple of live tracks on one CD entitled The Begining. The band appeared on Polish national TV ? TVP1 in show called ?Magazyn Raj? (see Illuminandi w raju at Miasto Ma G?os).

Since Illuminandi's style was gradually developing towards the harder, metal edge, it soon became evident for the band that they needed someone to handle the aggressive vocals. Thus Rajmund ?Melon? Jele? reinforced the band with his powerful growls and screams.

It was in this line-up that Illuminandi recorded their last effort up to date, a 5-song EP entitled Illumina Tenebras Meas. This Latin title means Illuminate My Darknes. Initially, the MCD was to include 4 songs in Polish and one in English, but eventually the band decided to re-record the Polish tracks in English. During the recording stage Janusz Domka stepped in to replace Szymon Grych on drums. Some time later Rajmund Jele? and Patrycja Pyzi?ska left the band. They were replaced by Rados?aw So?ek and Krzysztof Kawa.

Having existed for about 9 years now, the band may not have produced a rich discography, but they have certainly won the hearts of many listeners in Poland and abroad. The group has shared the stage with many well-established rock and metal bands such as e.g. 2TM2,3, Ador Dorath, Anastasis, Armia, Cemetery of Scream, Dissolving of Prodigy, Greedy Invalid, Holy Blood, My Silent Wake, OX, Pantokrator, Pillar, Project 86, Sacrificium, Silent Stream of Godless Elegy, Tourniquet, Virgin Black taking part in festivals in Poland, Germany, The Czech Republic, Switzerland and Ukraine. Illumina Tenebras Meas release show took place on the 21st April 2007 at the Elements of Rock festival in Switzerland. The EP was released in Poland on MocneRami? Records.

IlluminandiThe songs on the EP are varied, the production is better than ever. Prepare for an intense mixture of crushing guitar riffs, pounding bass, raging drums, soothing sounds of cello and violin, powerful growls and screams and emotional clean vocals. You can call it gothic, folk, symphonic, hardcore or death metal, but its simply Illuminandi.