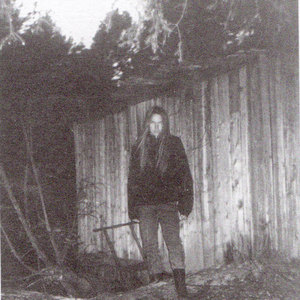 Ildjarn was a raw black metal solo project from Norway that formed in 1992. Ildjarn recorded music until 1997 but did not officially end until 2005. The man behind Ildjarn was Vidar Vaaer, although some releases were collaborations with a musician known as Nidhogg. Of all the released music, the only Ildjarn song to have its lyrics published was Eksistensens Jeger, from the self-titled Ildjarn-Nidhogg compilation.

Of all the released music, the only Ildjarn song to have its lyrics published was Eksistensens Jeger, from the self-titled Ildjarn-Nidhogg compilation.

Ildjarn, along with fellow comrades Ihsahn and Samoth of the local Telemark area (Norway) formed the band ?Thou Shalt Suffer'. The music consisted of Death Metal, genre that gained notoriety in the end of the 80's and early nineties, but even darker than what the basics of Death Metal had defined. As musical duties, Ihsahn took care of guitars and vocals, Ildjarn was at the bass, whereas Samoth played guitars and Thorbjoern Akkerhaugen was on the drums. In the same year, the band released a rehearsal tape, a 7? EP and a demo under the name of ?Into the woods of Belial', which were later re-released on a single CD by Nocturnal Art Aroductions.

After participation in band 'Thou Shalt Suffer', Ildjarn, choosing not to have to go through the whole process of being involved with other individuals opted to create his own sound, under the banner of the same name, ?Ildjarn', a word which has no specific meaning. Ildjarn recorded ?Seven harmonies of unknown truths', the first demo tape (which is extremely rare to find nowadays). One year later, the self-titled demo ?Ildjarn' was recorded with vocal assistance done by Ihsahn (Emperor, Peccatum). The final Ildjarn demo, ?Minnesjord', was recorded and released in 1994.

In the early stages of 1993, Ildjarn joined forces with long time friend Nidhogg to create the cult ?Norse' 7? EP containing 4 tracks. This EP was released one year later by Samoth's Nocturnal Art Productions, and was limited to 500 copies. Another Ildjarn-Nidhogg recording, the ?Svartfr?d' Mini-CD, would follow in 1996, this time under the banner of Norse League Productions, Ildjarn's own label. Both releases have a slightly different sonority when compared to the typical Ildjarn sound, mainly because of the use of a drum machine rather than real drums.

The year of 1995 gave birth to the first Ildjarn debut-cd,?Det Frysende Nordariket', released by NLP in a limited edition of 1000 copies. The CD consists of past Ildjarn recordings such as the Ildjarn-Nidhogg ?Norse' EP along with the ?Ildjarn' and Minnesjord' demos. Det Frysende Nordariket was re-released in 1997 in collaboration with Napalm Records. Later in 1995, the self-titled ?Ildjarn' CD was released in a limited number of 750 copies.

Ildjarn reached its culminating point in 1996, releasing 3 albums which were for the most part recorded in the latter stages of 1995. First came the cult album ?Forest poetry', 22 tracks of unpolished and simplistic norse metal, which would change the definiton of ?raw metal'. This is also the first time that Ildjarn used English for his lyrics instead of his native tongue.

Nevertheless, most Ildjarn freaks were surprised to hear the following album ?Landscapes', a double-cd containing nothing but ambient music. Having spent many years in the forests and mountains of his native land, Ildjarn thought it was necessary for him to convey all his energies and record an album to lay forth the emotions he has had towards nature. Drawing no similarity with past albums, ?Landscapes' is a constant flow of simple musical patterns which plays with sound waves in an unexpected manner for the typical black metal listener.

The quintessence of hatred was achieved with ?Strength and anger', released by Norse League Productions, in cooperation with Napalm Records, in CD format. The song titles and album layout are a perfect illustration of the concept represented in this album : a plunge into the deepest pits of darkness. Musically, the CD offers a relentless sound that can only make a madman's heart beat louder. It was clear from now on that Ildjarn would not seek a more commercial-like approach, unlike most of his Norwegian counterparts?

After the release of the ?Strength and Anger' cd, in 1996, news concerning Ildjarn became very scarce and rare. Rumours surrounding the band were that it had come to an abrupt end. Yet, despite having ceased to make metal-oriented music, these rumours proved to be false. In fact, in 1997, Ildjarn along with fellow ally Nidhogg were in the making of new ambient material in the vein of ?Landscapes' although this time giving way to a more professional result and with no improvisation at all put into the composition. The work was finally achieved in 2002, year of release of the two cds, ?Hardangervidda part 1' and ?Hardangervidda part 2' (mini-cd). Both masterpieces, which Ildjarn himself describes as ?Symphonic landscape music' pay honour and tribute to Norwegian nature and more specifically the Hardanger Mountains. This was the last material ever done by Ildjarn, however not putting an end to the legacy created many years ago?

The arrival of the two ambient cds on Norse League productions, along with the unexpected (?) release of ?Son of the Northstar' by Full Moon Productions, sparked the band's comeback in the musical scene. Many of the old Ildjarn cds on NLP, including the ?S/T', ?Det Frysende Nordariket' and ?Landscapes', became available via Ildjarn himself, mainly due to a sudden demand for the old material and a need to get rid of the cds which were kept stacked in the NLP basement during many years.

Another important event was the new coalition formed between Ildjarn and Finland's Northern Heritage Records. Both parties agreed to re-release all of the past Ildjarn material from the first demos up to ?Strength and Anger', in vinyl format. Despite most vinyls being made in a limited quantity, this was a chance for listeners to get hold of the cult material of the band. Northern Heritage also released the Ildjarn-Nidhogg compilation cd and LP reassembling all past metal recordings of the duo from old to more recent, the ?1992-1995' compilation cd, and the ?Nocturnal Visions' mini-cd, gathering old unreleased material. Other upcoming releases are the Sort Vokter ?Folkloric Necro Metal' on LP, the Demo 94 gatefold vinyl, the Demo 93 gatefold vinyl, the ?1992-1995' gatefold double vinyl, Nocturnal Visions MLP with 2 extra tracks. Also, several tape releases were made available from Poland's Blutreinheit productions (Division of Monstrous Star records; see ?links' section) such as Hardangervidda part 1 and part 2.

As of 2006, the band website stated that no more news would be printed, leading to the conclusion that Ildjarn had ended. The title of Ildjarn's 2005 release, Ildjarn is Dead, further supports this conclusion.

Son Of The Northstar