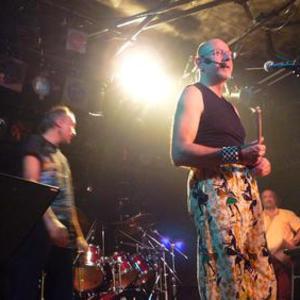 IL CASTELLO DI ATLANTE came together in 1974 when Dino Fiore asked his childhood friend Paulo Ferrarotti to form a band. Their name is taken from a magician called Atlante in Ludovico Ariosto's Romance epic ''L'Orlando Furioso''. They have undergone relatively few changes over the years with the line-up having remained more-or-less the same since 1982. After meeting the band at a concert in 1983, Beppe Crovolla suggested that they work together and in 1990 he invited them to contribute to his New Prog '90 project.

When they recorded their first album with Crovolla, the band consisted of Paulo Ferrarotti (drums, vocals), Dino Fiore (bass), Massimo Di Lauro (violin, keyboards), Aldo Bergamini (guitar, keyboards, vocals) and Roberto Giordano (keyboards, vocals). Fiore quit unexpectedly in 2000 and was replaced by Roberto Franco Fava, although Fiore has since returned. IL CASTELLO DI ATLANTE'S music may not be the most complex or original, but it is highly emotional and beautiful. The Italian lyrics are full of allegories and metaphors, while the music is built around keyboards and choral effects, with violin flourishes and soaring emotive guitar solos. Due to the presence of the violin, comparisons with QUELLA VECCHIA LOCANDA are perhaps inevitable although GENESIS would seem to be the band's main influence.

For their first album "Sono Io Il Signore Delle Terre A Nord" (1992) they were able to draw on 16 years worth of material and although it sold well the band's later works are generally of higher quality. Their second studio album "L'Ippogrifo" (1995) is their most laid-back work and is perhaps a bit one-paced. It features a combination of new material and reworked old songs, but overall it lacks the freshness of the debut. "Come Il Seguitare Delle Stagioni" (2000) was the first album to consist of entirely new material. It's a beautiful album that acts as a fine showcase for Di Lauro's expressive violin. In 2003 the band contributed to a conceptual CD based on the Finnish epic poem ''Kalevala''. The song they recorded for this project appears alongside some other fine material on the synthesizer-laden ''Quintessenza'' (2004). Their most recent album ''Capitolo 7 - Tra Le Antiche Mura'' is generally accepted as their masterpiece. It's based on a literary concept with each song presented as a book, and was selected by the jury of the Italian Prog Awards as one of the best Italian prog albums in 2009.