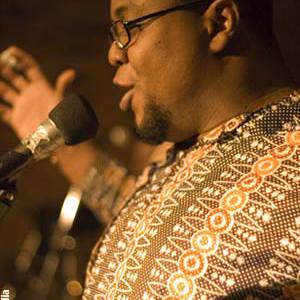 Ikwunga The First Afrobeat Poet ?Deep Sleep', the second album from the first afrobeat poet and originator of afrobeat poetry, Nigerian afrobeat poet (aka Abp) Ikwunga, is a collection of highly danceable tracks infused with a fine collection of African proverbs and words of wisdom delivered in Ikwunga's original amalgamation of Pidgin and English, in rhyme. What's exciting about this new album is that Abp Ikwunga has teamed up with the phenomenal Canadian Afrobeat collective Mr.

?Deep Sleep', the second album from the first afrobeat poet and originator of afrobeat poetry, Nigerian afrobeat poet (aka Abp) Ikwunga, is a collection of highly danceable tracks infused with a fine collection of African proverbs and words of wisdom delivered in Ikwunga's original amalgamation of Pidgin and English, in rhyme. What's exciting about this new album is that Abp Ikwunga has teamed up with the phenomenal Canadian Afrobeat collective Mr. Something Something. This would be a third album for Mr. Something Something, a highly electrifying and socially conscious band whose sophomore album ?The Edge? was nominated for a 2007 JUNO Award for World Music Album of the Year.

Abp Ikwunga whose first album Calabash: Afrobeat Poems by Ikwunga Vol.1, was produced by the King of Afrobeat Keyboards, Dele Sosimi (former musical director of Fela Anikulapo-Kuti's Egypt 80 Band, and co-founder of Femi Kuti's Positive Force Band) has shown a striking natural progression as an Abp. Calabash Vol.1 features the hit track, Di Bombs, which featured on the Afrobeat Sudan Aid Project (ASAP) compilation CD (Apple iTunes & Modiba Productions). ASAP has raised over $180,000 to benefit victims of the genocide in Darfur, Sudan: Di Bombs was the major download on the ASAP CD. Di Bombs is also a movie soundtrack of the movie ?Kassim the Dream?, on Kassim Ouma, the former Ugandan child soldier who is currently the USBA light middle weight champion. Kief Davidson, producer of the critically acclaimed movie, ?The Devil's Miner? (www.thedevilsminer.com), is the producer of ?Kassim the Dream? with co-producer Forest Whitaker.

Ikwunga, an American Board Certified Psychiatrist and the son of a famous West African poet and tribal Chief, is of unquestionable afrobeat pedigree?he was a regular opening act for Femi Kuti's Positive Force at Fela Anikulapo-Kuti's famous Afrika Shrine in Lagos, in the early 90s. He is also a champion for The African Alliance on Mental Illness (TAAMI), which is charged with the task of tackling the stigma attached to mental disorders in Africa and initiating a dialogue for mental health reforms. There is a need to reexamine the assumption that the challenges in Africa are only physical, or that her current growing pains, unrest, displacement of peoples and man-made poverty, are without psychological consequence.

With his collaborative poetic license as the Abp, the Nigerian wordsmith first approached Mr. Something Something about teaming up for a series of Canadian dates. The original music, which sprang from this collaboration, was so strong and the poems so strikingly rich in meaning and delivery that earlier plans for non-collaborative releases by both parties were put on hold until this amazing partnership was put on record.

Deep Sleep addresses the trance state into which World leaders have been lulled and corrupted by circumstances they could not control but may be able to today. Highlife-styled D.N.D.A.b.p. describes the crises in the oil-rich Niger Delta but, in contrast to Fela's venom, the poet calls for dialogue between the embattled youth and establishment. Di Bombs cleverly and effectively addresses present-day economic imperialism (?Di bombs are built in London / But di bombing is in Congo?) and the lack of political will in the West to tackle poverty in under-developed and emerging nations. Abankwa (let's dance together) is derived from proverbs of diverse African origin Among the Ibo's of Eastern Nigeria, these universal ?words of wisdom? are referred to as the ?palm oil? with which ?yam? of wisdom is eaten?You Are Beautiful artfully addresses our collective responsibility as wardens of mother Earth, and the downtrodden, including those with medical conditions of the brain. The title track draws inspiration from Eastern Nigerian rites of passage in which an initiate ?travels? to the spirit world where the boundaries of the physical world ?of the living? are redefined and the oneness and equality of all humanity is manifest. A poetic image might float out of the speakers, whispered in confidence or it may lead to headlong impact with Abp Ikwunga's roaring, bellowing conviction in his cause.