IKE TURNER & The Kings Of Rhythm 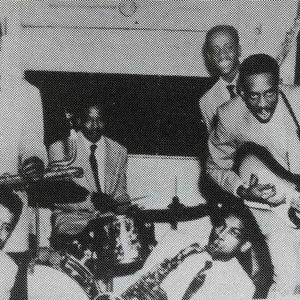 Ike Turner Ike Wister Turner. November 5, 1931 Clarksdale, Mississippi, USA. December 12, 2007 San Marcos, California, USA Ike Turner was an American musician, bandleader, talent scout, and record producer. His first recording, "Rocket 88" by "Jackie Brenston and his Delta Cats," in 1951, is considered by some to be the "first rock and roll song" ever. However, he is best known for his work with his ex-wife Tina Turner as one half of the Ike & Tina Turner revue. Spanning a career that lasted half a century, Ike's repertoire included blues, soul, rock, and funk.

Ike Turner was an American musician, bandleader, talent scout, and record producer. His first recording, "Rocket 88" by "Jackie Brenston and his Delta Cats," in 1951, is considered by some to be the "first rock and roll song" ever. However, he is best known for his work with his ex-wife Tina Turner as one half of the Ike & Tina Turner revue. Spanning a career that lasted half a century, Ike's repertoire included blues, soul, rock, and funk. Alongside his former wife, he was inducted to the Rock and Roll Hall of Fame in 1991 and in 2001 was inducted into the St. Louis Walk of Fame. Turner won two Grammy Awards.

Turner was born in Clarksdale, Mississippi on November 5, 1931, to Beatrice Cushenberry, a seamstress and Izear Luster Turner, a Baptist minister. Ike was the younger of two siblings, he had an elder sister, Lee Ethel. Ike got his first taste of pleasing an audience at the age of eight working at the local Clarksdale radio station, WROX, located in the Alcazar Hotel in downtown Clarksdale. A man in charge of the station put Turner to work as he watched the record turntables. Said Turner: ? I got a job driving the elevator in the Alcazar and the radio station was on the second floor. It was very exciting to me, a radio station. I'd run up to the second floor and look through the window at the guy spinning records. He saw me and told me to come in and showed me how to 'hold a record.' I'd sit there and hold it until the one playing stopped, then I'd turn a knob and the one I was holding would play. Next thing I know, he was going across the street for coffee and leaving me in there alone. I was only eight. That was the beginning of my thing with music. ?
Turner was soon carrying amplifiers for blues singer Robert Nighthawk, who often played live on WROX. Ike was mesmerized by Nighthawk's playing, but nothing could equal the experience of hearing Pinetop Perkins on piano for the first time. Growing up, his idol Pinetop Perkins helped teach the young Ike to play boogie-woogie on the piano. Ike soon was enamored of other blues artists such as Howlin' Wolf, Sonny Boy Williamson (Rice Miller), Charley Booker, Elmore James, Muddy Waters and Little Walter.

Ike Turner's actual music career began in earnest in the late-1940s where he formed a group whom he christened The Kings of Rhythm. In 1951, the band recorded what some historians have debated as "the first rock and roll record" with "Rocket 88", credited to Jackie Brenston and His Delta Cats (this band did not actually exist). Brenston was both the band's saxophonist and the lead vocalist of the song, and on the original Chess release was listed as the song's writer. "Rocket 88" was produced at Sun Studio in Memphis by Sam Phillips. The record was one of the first examples of guitar distortion, which happened by accident when one of the amplifiers was dropped before the recording.

Ike and the Kings of Rhythm settled into local fame in St. Louis where the band locally recorded for a St. Louis label and even appeared on local television shows. Throughout this early period, Turner became a recording scout and A&R man for independent record companies including Sun Records - where "Rocket 88" was recorded, helping the likes of Howlin' Wolf, Sonny Boy Williamson, Elmore James and Otis Rush get signed. He also became a sideman playing guitar for these blues acts and more. Musically, Turner was known for his hard-hitting guitar style. He was known to put the whammy bar of his Fender Stratocaster to frequent use.

Turner's music career changed drastically after meeting a teenage singer from Nutbush, Tennessee, named Anna Mae Bullock, who demandingly grabbed a microphone during a singing session at one of St. Louis' nightspots and sang a B. B. King song in her now-trademark throated raspy vocals. Bullock's performance impressed Ike so much he allowed Anna to join his band as a background singer. However within a year, Ike's plans for Bullock changed after Anna recorded what he originally stated was a demo for a song that was to be sung by a male vocalist. After hearing her vocals, he let it be released under an independent label and in the process changed the name of the singer from Anna Mae Bullock to Tina Turner - naming her after Sheena - and the name of the band to the Ike & Tina Turner Revue. It is believed that this singular act is what propelled the now "Tina Turner" into the spotlight, creating a music mogul that would last decades. "A Fool in Love" became a national hit in early 1960, reaching the top three in the R&B charts and becoming a top thirty pop hit in the process. From then until 1976, Ike and Tina Turner became one of the most explosive duos in rock & soul music. The creation of the revue also led to the soul revues of the 1960s. Inspired by Ray Charles, Turner created a trio of sexy background singers and dancers who were named The Ikettes who often had their moves choreographed by Tina and Ike. The Turners eventually scored several hit singles including Rose Marie McCoy's "It's Gonna Work Out Fine", "River Deep - Mountain High", "I Want To Take You Higher", "Proud Mary", and "Nutbush City Limits" over thirteen years.

The success the duo contributed eventually led to the creation of the Los Angeles-based Bolic Sounds studio, founded by Ike. However, after Tina abruptly left Ike after a violent altercation in 1976, Ike lost ground in the national music market. As a solo artist, he struggled to find success after Tina and after releasing two failed solo albums, had found himself facing drug and weapons charges, of which he was convicted in 1989. After the musical legend's arrest and prison term, Ike was released from prison in 1993. Ike enjoyed a long period of sobriety. During this time he recorded two solo albums in his own studio, and he wrote his autobiography called Taking Back My Name. He also re-recorded "I'm Blue (The Gong Gong Song)" in a duet style with Billy Rogers. The remake received very strong reviews from Billboard Magazine, Larry Flick, Singles Reviews published January 14th 1995.

The musician went back on the road and back into recording music, which continued until his death. In 2001, Ike released the Grammy-nominated Here & Now album. Three years later, he was awarded with an "Heroes Award" from the Memphis charter of NARAS. In 2005, he appeared on the Gorillaz' album, Demon Days, playing piano on the track, "Every Planet We Reach Is Dead". He played live with the band on the band's world tour to that particular song. In 2007, Ike won his first solo Grammy in the Best Traditional Blues Album category for the album, Risin' With the Blues which was Mixed at Future Sound Studios by Rene Van Verseveld. Before his death, a collaboration between Turner and the rock band, The Black Keys, by Gorillaz' producer Danger Mouse was expected in 2008.

In the mid-1980s, Turner was convicted of drug-related charges and sentenced to several years in a California state prison. Turner was still in prison pleading parole when he and Tina were inducted to the Rock & Roll Hall of Fame in 1991, which Phil Spector accepted on their behalf (Tina was working on an album at the time).

In 2001, Turner's long-awaited autobiography, Takin' Back My Name (ISBN 1-85227-850-1), was published. In Tina Turner's 1986 autobiography, I, Tina, later filmed as What's Love Got to Do with It?, Tina accused Ike of violent spousal abuse, which Ike repeatedly denied for many years. However, in his 2001 autobiography Ike admitted, "Sure, I've slapped Tina... There have been times when I punched her to the ground without thinking. But I have never beat her."

Ike converted to Judaism in 1994. During his interview with NPR's Terry Gross on Fresh Air, Ike claimed that he and Tina Turner were never married, and that she took his name in order to discourage a former lover from returning to her.[6]. On October 17, 2007, in a telephone interview conducted by radio personality Howard Stern, Ike reiterated his claim that he and Tina Turner were never actually married.


Turner died on December 12, 2007 at 76 years of age at his home in San Marcos, California, near San Diego. He was found by his ex wife Ann Thomas. Little Richard was asked by the family to speak at the funeral. He preached a brief, powerful and sobering message.