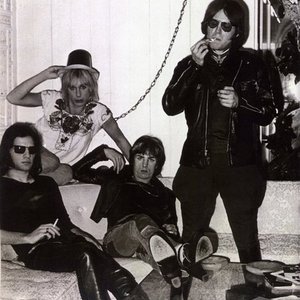 The Stooges are a rock n roll band which formed in Ann Arbor, Michigan, United States in 1967. They released three studio albums before breaking up in 1974. Despite having little, if no chart or radio success, the band has proved to be one of the most influential rock groups of the past 40 years. The band reunited in 2003 and released another record in 2007. Their best known lineup consisted of Iggy Pop (vocals), Ron Asheton (guitar), Dave Alexander (bass) and Scott Asheton (drums).

Singer Iggy Pop and his wild onstage antics were often the focus of attention. The band sold very few records in their original incarnation and often performed to indifferent or hostile audiences. Nevertheless, the Stooges are often regarded as hugely influential both on then-nascent heavy metal and later on punk rock.

As has been said about The Velvet Underground, the handful of people who did actually buy the Stooges' early records at the time ended up forming bands of their own. Velvet Underground member John Cale produced the original incarnation of their self-titled album).

The Stooges drew their sound from a variety of influences: The Who, James Brown, Bitches Brew, Ravi Shankar, Bob Dylan, Booker T and The MGs, The Troggs, The Rolling Stones, The Doors and The MC5.

In 2003, Iggy, Scott, and Ron reformed The Stooges with Minutemen and fIREHOSE bassist Mike Watt filling in. The current lineup has played festivals around the world since, and in 2006 recorded a new album with Steve Albini.

Founding member and guitarist Ron Asheton was found dead at his home in Ann Arbor, MI on January 6, 2009. Iggy Pop posted a message on his website stating "I am in shock. He was my best friend."

Sony Music is preparing to release a remastered version the classic album Raw Power in April 2010. You can find out more information at Iggy & The Stooges Official Website, www.iggyandthestoogesmusic.com.

Open Up And Bleed!

Open Up And Bleed