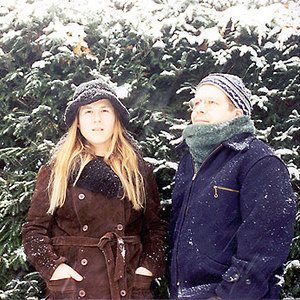 The Iditarod is history. The duo of Karin Wagner and Jeffrey Alexander split up in 2003. In their eight years of existence, the duo released an impressive back-catalogue on labels as bluesanct, Timelag, Camera Obscura, Last Visible Dog, Elsie and jack?They can easily be counted as one of the pioneers of the current folk-revival, with their eclectic mix of traditional folk and psychedelica. The Iditarod were an avant-folk ensemble from Rhode Island, USA. Carin Wagner and Jeffrey Alexander have been playing and recording together from 1996 to 2003.

The Iditarod were an avant-folk ensemble from Rhode Island, USA. Carin Wagner and Jeffrey Alexander have been playing and recording together from 1996 to 2003. The earliest output -was recorded as a duo, or just by carin. At that time, Iditarod was more popsong-oriented.

The definate sound of the band was reached after forming a quartet with Margie Wienk on cello and Matt Everret on violin. Margie also performs with Fern Knight, while Matt also worked with Will Oldham / Bonnie Prince Billy and Espers.

Its in this lineup that the band is in its most productive phase: the 3 yuletide albums (4 if you include the yuletide compilation, the critically acclaimed 'the ghost, the elf...' album, contributions on the poor minstrels tour cds, and a ton of 7"s and compilation appearances.

Also, it's in this later era of the existence of iditarod that Kleine was put together. the album was compiled of all unreleased recording from the very beginning of iditarod, untill the most recent songs. It features Carin's more traditional songs, collaborations with the likes of b'eirth (in gowan ring, birch book) and Alastair Galbraith, and more psychedelic tape experiments and improvisations. all mixed together this is odd enough the most coherent Iditarod record. It came out in 2002, but was unavailable for quite some time, until its re-release in June 2007

After the split in 2003, Jeffrey founded the Secret Eye label, formed Black Forest/Black Sea and curated the Terrastock 6 festival. Karin Wagner on the other hand, stopped making music - hopefully temporarily.

Iditarod is history. Its no coincidence that most of their records have been re-released.

The Ghost, The Elf, The Cat And The Angel