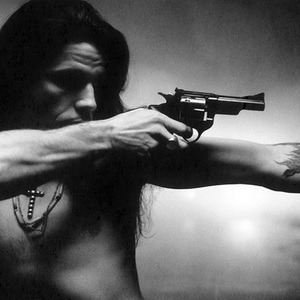 Astbury's career began in 1981, with the gothic rock band Southern Death Cult. At that time, he was going by the name "Ian Lindsay." Southern Death Cult gigged to support its "Moya" single, and secured a slot as an opening act for Bauhaus in 1983. Shortly after that tour, the band split up. Along with guitarist Billy Duffy bassist Jamie Stewart and drummer Ray Mondo, Ian (now going by the surname "Astbury"), formed a new band, The Death Cult and later dropped Death from the name.

Along with guitarist Billy Duffy bassist Jamie Stewart and drummer Ray Mondo, Ian (now going by the surname "Astbury"), formed a new band, The Death Cult and later dropped Death from the name.


The Cult was one of the most successful British rock bands of the late 1980s and early 1990s. With the 1984 release of their first album Dreamtime, The Cult were the darlings of the Indie post-punk scene, their chart topping "Spiritwalker" single having held at number one for three months. Their second album, Love, evoked memories of 1960s psychedelia such as The Doors, and the Pretty Things. It also featured their now classic hit "She Sells Sanctuary", which introduced them to an international audience. On their third album, Electric, The Cult made a radical transformation to hard rock reminiscent of AC/DC and Aerosmith with the help of Rick Rubin. This further broadened their audience as rock began making a comeback in the late 1980s. Guns N' Roses, who were heavily influenced by Electric, opened for The Cult on their 1987 North American tour, before going on to sell millions of copies of their debut album Appetite for Destruction.

Although The Cult went on to greater heights with their mainstream hit single "Fire Woman," (on the follow up 1989 Sonic Temple album), they began to get criticized by many hardcore fans on artistic merits. Soured on the band's more commercial direction, The Cult were now characterized as pretentious and as having sold out, particularly among their British fan legion.

The dent in their reputation was amplified by the loss of many Sonic Temple fans, when their next album (Ceremony, 1991) delivered dissapointingly in the wake of an oncoming grunge fad.

In 1994, The Cult returned with their untitled album and a musical change of pace. Gone was much of their overblown rock trappings, replaced instead by Astbury's growing interest in electronica and introspective lyrics. To support the album they set out on tour, but in Brazil, Astbury's creative differences with guitarist Billy Duffy reached their peak, and Astbury walked out on The Cult.

Inspired by his sudden change in direction, Astbury immediately assembled another group of musicians and began writing new songs. He called the group The Holy Barbarians, and in 1996 the band released an album, "Cream". Although the Barbarians were not a commercial success, they were well received by many who had regained respect for Astbury as an artist.

Personal difficulties and a drive for further introspection drove Astbury away from his new group, as he began working on a solo album (eventually released as Spirit/Light/Speed), to mixed reviews and low sales.

In 1999, Ian Astbury and Billy Duffy regrouped The Cult to head one of the most financially successful tours that year. A new contract with Atlantic Records was inked, and in 2001 came the release of Beyond Good And Evil. Early radio success was being had by the single Rise, until the band had a falling out with Atlantic and they killed any and all commercial promotions and radio play for BG&E. The fight with Atlantic was described by Ian as Soul Destroying and a disillusioned Astbury, brought The Cult onto another hiatus in 2002.

Having long been influenced by Jim Morrison, in 2002 Ian Astbury filled his hero's footsteps by becoming lead singer in an updated version of The Doors, with original members Robby Krieger and Ray Manzarek, known as The Doors of the 21st Century, renamed in 2005 to become Riders On The Storm. In 2003, Astbury also performed with surviving members of MC5 at the 100 Club in London, before finally reforming The Cult with Billy Duffy again in 2006, for a series of live dates and rumours of reissues and another greatest hits compilation in the works.