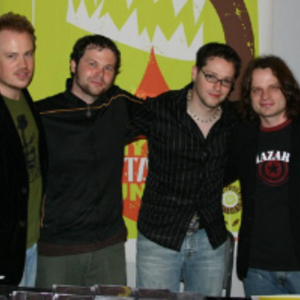 This attention has kept HSU touring with many of their favorite artists such as Switchfoot, Relient K, Kutless, Toby Mac, Jeremy Camp, Third Day, and Pillar.
Backed by the heavy groove of Shawn Lewis, Bryan Albrechtson, Ray Burnham, Mike Jackson, and Tim Downing, Hyper Static Union electrifies audiences. The response that they receive as they tour the Nation foreshadows much bigger things to come.

Meet Him In The Air