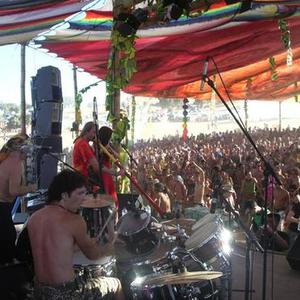 Passionate about music, a follower of the 70s, fan of Led Zep, Hendrix, Stooges...Gill alias Hyper Frequencies started his career at the end of the 80s as bass player in several rock groups, notably ?Stalker'. At the start of the 90s he discovers Techno and starts to mix at the end of 94. Manifesting as a good DJ he attracts the attention of Mick Chaos, the ?big boss' of the British label Chaos Unlimited that releases his 1st mix tape ?The Machine'

followed by several others, notably ?The Wisdom Place'.
In 98 he purchases his 1st computer and equipment.
Then slowly but surely, everything falls into place...
Mick Chaos is the 1st to produce his music,
?First Elevation' and ?Drum Explorer (see discography),the latter composed with
the collaboration of his friends in Ja?a, a killer track that makes a tour of
the globe and provides Gill with an important grounding for composition.
In 2000, he joins up again with ?Turbo Trance' a label that he represents for
a while and with whom he releases several tracks,
notably his 1st LP ?A Prayer/Running Time'...
During this period Gill and Fred (Neuromotor) meet one another.
Conceived not only from a deep friendship but also hard work...
The result is the creation of their album ?Plastik Elephant vs Hyper Frequencies'
an underground, psychedelic album, and the realisation
of their joint project ?Crazy Lions Cult'.
Then Fred (Neuro) decides to set up his own label ?Mechanik Sound Records'.
Gill joins him and it's with Mechanik that he releases his 1st solo album,
the ?Red Crystal Moon'(The symbol for the day of his birth on the Maya calendar)...
an album where the words psychedelic state and energy count most.
There follows a multitude of dates around the globe (see agenda) where each time
his energy infects the dance floor...
2004 will be a very busy year, notably with some of the present Mechanik team:
Neuromotor, Chromatone, Phatmatix, DJ Anaka, DJ Tajmahal:
all reunited for many months in the south of France, at Ch?teau de Sanilhac
(thanks to Tony).
At this magical place, rich in 1100 years of history they will release their
famous double compilation (18 tracks!) : ?Mechanik Castle? in the shops Since
the 28th February 2005.
Gill participates on 8 of the tracks on this project : 3
?Hyper Frequencies? and 5 others with his side Projects:
?HyperChrome?, ?Los Diablos?, ?Super Punk?.
On his return to the Lyon region, Gill devotes with
Fred Neuro to ?Crazy Lions Cult?, also created a new project
with his friend Psylom , and for sure his new solo album, coming out in November 2007 on Syncronize Records.....
Watch this space....