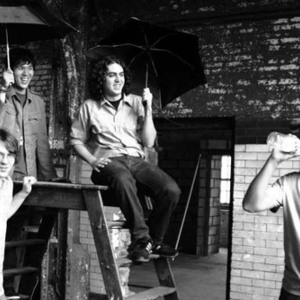 The most immediately striking component of Human Televisions sound is the guitar. Its perpetually jangly and deliciously upbeat, calling to mind all those underrated Teen Beat and Sarah Records bands who stood at the forefront of what some considered a Golden Age for our lovably nerdy counterculture. The production style is understated and really, barely noticeable; everything's crisp and relatively clear, but refreshingly free of any sterilizing sheen. The subject matter covered by frontman Billy Downing boredom, failed relationships, etc.

is far from revolutionary, but the phrasing and presentation of his lyrics boast enough subtle nuance to take something fairly standard and make it extraordinary. There are hints of textured gloominess (Im Moving On) every now and then, but its not a mood that suits them particularly well. They're at their best on upbeat tracks like "I Laughed" and "In Front of the House," where their sunshiny melodies take center stage.

All Songs Written By: Human Television