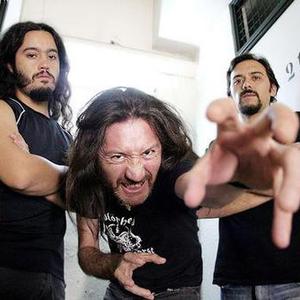 Huinca is one of the most successful bands in the Chilean rock scene, is widely known and enjoy a high prestige. While Huinca may only boast three years of existence and one album so far, they were nevertheless invited to play in some of the most important international rock festivals of Brazil, Argentina and Poland. Due to their unique style and powerful stage presence Huinca has been touring constantly, especially in their home country of Chile, where they have played in the most well known clubs and festivals.

In 2006 Huinca decided to take a break from touring in order to dedicate more time to the creation of their second, much awaited album. It was then that the band was invited to Europe to tour Poland, the highlight of which was the Slot Art Festival. At this festival Huinca was named best show by the press and was a testimony to the of Latin American rock. At present Huinca is working on its second album.

June, 2001. Huinca begins to take a more definite shape and form when Mauricio Contreras, Miguel Y?nez, Flavio Salas & Cocke Cumplido decide to change their style of music. In order to break out of the confines of classic rock they hope to create riffs that would better express their identity and give their music greater meaning. In their search for the perfect means of expression they first turn to various known styles only to come to a profound realization: that it is not necessary to search outside themselves for a style that would express their identity but that they can find what they are looking for by searching inside themselves, in their own history and culture. The music with which they had grown up with, overlooked by many, begins to play a major role in the creation and formation of their style. By merging rock/metal with the melodies and rhythms of the aboriginal population Huinca was able to find what they were looking for. During this search the band begins to understand what would come to be the message of their music. That to be Chilean is to be mestizo in every way, both mentally and physically. As their style begins to develop and take concrete shape Huinca continues playing under their old name, Stonehenge. Every concert serves to reinforce their decision to play music that is more authentic, and indigenous. On stage, the band experiments with such powerful new rhythms and sounds in their musical arrangements and intros that the usual repertoire has to give way to the more innovative creations and compositions. In its debut album Huinca sets off on a rhythmic journey through Chile. It is the awakening into a world with a birds eye view of ?The Land of the Earthquakes?. An album which embodies the sounds of the earth. Huinca style Ethnic Metal. The fusion of Metal, Ngillatunes, Huaynos, Tamur? and Tonadas. The debut album, Huinca, is released in 2003 and the bands signs a contract with L.H.D.L.B Records Canad? and releases its second edition in Canada and the U.S. In 2008 Javier Hern?ndez, an experienced musician and guitarist joins the band and arrives right on time to help out with the recording of the new album Sic Semper Tyrannis. New Album Sic Semper Tyrannis is in the final stages of recording and due to be released in July 2008.

Huinca will be promotional touring Europe in August to November 2008. They have been booked in Germany, Holland, Belgium, Sweden and England.

Huinca has produced three music videos so far, all of which have been aired in MTV Latinoam?rica as well as in various Chilean channels such as V?a X, ROCKAXIS TV, UCV televisi?n and Canal ABT. Ruca: Filmed in Rapel Lake in south central Chile. Mari Chi Weu: Material taken from festivals in Chile and tours of Mendoza, Argentina and Sao Paulo, Brazil. Boicot: Filmed in the Argentinian Cosqu?n rock festival, where the band played alongside Charly Garcia, L?on Giecco, Sepultura and Molotov.

www.huincas.cl
www.myspace.com/huinca
Check out our latest show in the Slot Art Festival in Poland!
http://www.youtube.com/watch?v=dAtLSdQxOBY

The song Fobia was chosen by the producers of the Polish film, Playground Movie, as part of the film's soundtrack. The premiere took place in Krakow, Poland on the 24 September 2006.