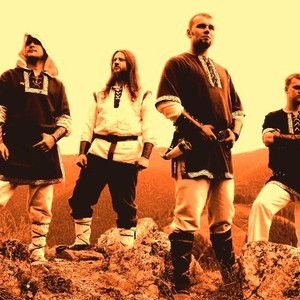 Hromovlad is a Slavic pagan black metal band from Slovakia. The band's themes deal with the Slavic gods, forests and pagan honour. They formed in 2003 and are still active today. Their first full-length album was "Vl?dca Lesov, Skaln?ch Stien", released in 2005. In November 2007 they issued a new album called "Oh?a hlad, vody chlad" Full history of the band: 2003 26.XI.2003 ? Beelphegor (guitars, vocals, programming) and Mathias (guitars) create their own band ? Hromovlad. 2004

In january 2005 this split ?Heathen Brotherhood? was released through Krutoslav Productions (R.I.P.) In april Hromovlad records in rehearsal room tape with unofficial promo material ?Rehearsal 2? that include some tracks for prepared debut album. 16.VII.2005 ? the first small concert in Energy Pub with bands D.Chorals, Morsat and Korium ? Zilina, Slovakia

In the beginning of march has been released Live DVD of Metal Swamp 28, live performance with some black metal hordes include Hromovlad. In the same time, there were released through ukrainian label Stuza Productions tape version of our debut ?Vladca lesov, skalnych stien?. It has profi fullcoloured cover and it's limited to 500 pieces. 31.III.2007 Hromovlad played at Legalize Murder fest 1 in Zlin (Czech republic). In april 2007 has been finally released by Ravenhearth productions a long-awaited Golden tribute to Master's Hammer with czech and slovak black metal hordes. Our part in this masterpiece is coversong of ??ern? Svatoz??? and one own song called ?Brie?denie.? 5.IV.2007 ? another great gig Apocalypse fest 9. in Trencin (Slovakia) along side with romanian legend Negura Bunget and some other bands. 4.V.2007 ? We were a part of In The Name Of Old School 1. live performance in Bratislava along side with magnificent hordes as Besatt (Pol), Morrigan (Ger) and Mortuary Drape (Ita). In august 2007 Hromovlad went to Musae Polymnia Studio to record of material for their second album "Oh?a hlad, vody chlad" - "Hunger Of The Fire, Cold Of The Water." 23.IX.2007 Hromovlad played in Nitra (Slovakia) with italian band Tundra. 20.X.2007 another gig Headbang Fest 1. in ?ilina (Slovakia). 10.XI.2007 ? german label Ketzer Records releases a long-awaited second album "Oh?a hlad, vody chlad" - "Hunger Of The Fire, Cold Of The Water" limited to 2000 pieces. 22.XII.2007 - another gig Apocalypsa Fest XII. in Ostrava (Czech republic).

19.I.2008 Hromovlad played in legendary Rock Klub Tartaros in Bansk? Bystrica (SR).
and they are one of the best if not the best in Slovakia

In april 2009 has been finally released by Ketzer Records a long-awaited Split CD ?Hromovlad / Slavigrom ? Perperuna.?
On the present Hromovlad prepares material for their third album. It will be issued under the wings of czech label NAGA PRODUCTIONS. The new album is totalled in cooperation with the new band member, who is the accordion player.