Hot Day at the Zoo 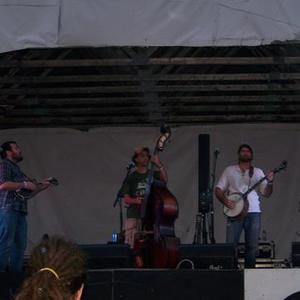 Based out of Lowell, MA, this progressively modern, 4-piece string band (guitar, mandolin, banjo, upright bass) is pioneering a new genre of music their fans are calling "ZooGrass"!!! It's a high-energy, gritty-urban-bluegrass with strong elements of folk, rock, blues, ragtime and jazz. Their instruments suggest old-time string-band music; their rhythms and tempos are those of bluegrass as often as not; and their songwriting and singing have a let-loose, country or jug band quality.

To say they play by ear isn't selling them short; they aim to spark a fire and keep it roaring by grabbing chance innovations like kindling, singing loud and clear, and playing their damnedest. ?Acoustic has never sounded so electric! At first, Lowell ''bluegrass" band Hot Day at the Zoo looks like a bluegrass band. The instruments are bluegrass (all strings). The fast-paced, finger-pickin' tunes start out sounding like bluegrass. Even the slight drawl in singer Mike Dion's voice seems like traditional bluegrass. But listen a wee bit longer and it is anything but.? Boston Globe 8/06

Together since 2003, Hot Day at the Zoo is a leading example of a younger band that found its way to traditional music through rock and roll. ?After listening to the Zoo live, you quickly get a sense that the conventions of traditional bluegrass, and its cousin old-time music, matter less to the band members than the directness and adaptability of the string band format. HDATZ creates a musical space with plenty of room for personal songwriting, musical virtuosity, hollerin' and carryin' on.? The Middlesex Beat 7/06
Not just a live band, Hot Day released a full-length album of original material in 2005 entitled Cool as Tuesday which has been met with nothing but rave reviews: ?What a treat for the ears this disc is! Its undeniably bluegrass but with a very young feel. Songs about whiskey-drinkin Irishmen, songs of leaving and coming home, lonesome songs of heartache and women with long black hair, and of course, songs about mama. Hot Day at the Zoo has definitely got something going on here!? 168 Magazine 7/05

Hot Day at the Zoo consists of Michael Dion on guitar, harmonica and lead vocals. Some of his songs are reminiscent of the Grateful Dead, while other songs are wails of pain for the sheer exhilarating hell of it. Imagine Tom Waits singing ?She had a smile as cool as Tuesday,? and you'll understand where his blues song ?Devil Woman' is going. David Cleaves plays the mandolin. By listening intently to what's going on and responding with his instrument, he adds intensity to the music at all times. Jon Cumming picks banjo (formerly on dobro). His soloing seems to be more about following sound where it leads than displaying a lightning technique in strict time. And Mr. Jed Rosen is on the upright bass. Animated and playful where the others are soulful and earnest, Rosen adds high harmonies, low harmonies, and a bit of country corn to the proceedings. All in all, Hot Day at the Zoo embodies what it means to put down your trouble for a while and get caught up in a laid-down groove that's sure to bring a smile to your face and a sway to your hips? Good Times!!!