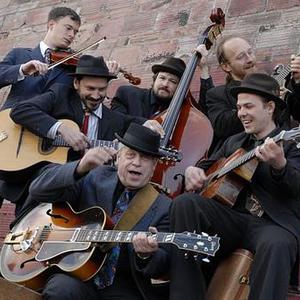 Review from cdreviews.com ? Gypsy jazz with everything on it, including humor. As the band's name suggests, this isn't just a recitation of the gospel according to Django. Rather, the group starts with classic jazz, and layers on a healthy spread of originals from several of the band's members. Hot Club Sandwich is fronted by a three-guitar lineup, making it the Lynyrd Skynyrd of Gypsy jazz. Greg Ruby, Ray Wood, and Kevin Connor share rhythm and solo guitar duties. Their sound is rounded out by bassist James Schneider, mandolinist Matt Sircely, and violinist Tim Wetmiller.

Added to this are guest appearances spicing up the ensemble with everything from washboard to maracas, accordion, vibraphone, and bongos. The combination creates an album full of flavor.
Covers here include Django's ?Heavy Artillery,? Oscar Aleman's ?Dedos Duros,? and Fletcher Henderson's ?Eight, Nine and Ten,? among others. Yet it's the band's originals that are the freshest?and most fun. Green Room kicks off with Ruby's ?Stompin' at KAOS,? inspired by a Washington radio station. The song's intro is also pure chaos?a cacophony of instruments?before erupting into a sweet melody that's part swing, part bop.

Live On The Verandah

Enjoy Yourself Or Get Out